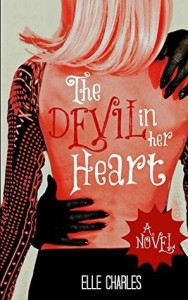 I downloaded a copy of Elle Charles‘ The Devil in her Heart from the Amazon free list. At the time of posting it was still free.

Description from Goodreads:
When Cara Hansen receives a psychic prediction during a bachelorette party entailing “a demonic presence approaching her near future,” she is determined not to believe that such supernatural things exist. But when she is visited at work by a strange man with unearthly features it seems only Cara can perceive, she begins questioning everything…including her sanity.

As a string of bad events occur, beginning with the disappearance of a co-worker, she begins to uncover secrets she was never meant to know, including a realm of demons and her unexpected affiliation with them…

Review:   *somewhat spoilerish*
This was not a winner for me, for a number of reasons. To start with the author sets the whole thing up as not adhering to Christian doctrine—characters stress that the evil beings are ‘Shadows’ not ‘Demons,’ for example—but then the book repeatedly falls back into Biblical and Christian mythology. (Look at the title, even.) There are demons, angels, a Garden of Eden, a fall, prayers to God are answered, crosses hold power to save, etc. It felt very much like Charles just couldn’t help it, or maybe (worse) didn’t even notice.

The book dragged on and on, spending lots of time on trivialities like going to work or dinner with family or dating or four thousand ‘woe is me’ complaints about not being the pretty one. Then it rushes through scenes relating to the actual plot, often even falling back on cop outs like ‘that week passed without incident’ and large chunks of unaccounted for time being swept away.

Despite involving demons and such the whole thing felt very flat. Mostly because no one seemed to really ever react to anything. For example, the declaration that Cara is half ‘shadow’ is made as the last sentence in a chapter, with no build-up and is not addressed in the following chapter. So any emotional impact it might have is missed. It might as well have been a statement about it being warm this August. Or the time she woke up on a different plain of existence (maybe even in hell), having just lost her virginity to a demon (now a Demon, not a shadow, BTW) and is being hunted by the demon queen and her horde of followers, you would think she might be a little freaked out. Nope, she’s concerned about missing her shift at work and heads off for breakfast. WTF? Really?

This was pretty much the norm for the book. It doesn’t allow tension to build. As another example, at one point Cara is in the middle of a fight to the death, then, while being strangled, she suddenly wakes up in a car and it’s over. (Which is really jarring, BTW.) It’s not until pages and pages and pages later that we get a second hand, paired down account of what happened. That scene (and plenty like it) could have been really powerful; instead, it just fizzles to flat. It felt like the author didn’t know how to conclude the fight, so she just skipped it.

There are also a lot of things that aren’t really well integrated into the plot. For example, Liz is presented as a work colleague, maybe-friend. She and Cara had never even hung out outside of work. So, Cara’s determination to save her, as if she’s the most important person to her, doesn’t make sense. Also, Caymn is oddly sweet, but there is no explanation for the fact that he is such a good ‘person’ when every other demon is evil. He is still a demon of greed, so why doesn’t he act like one?

The book is basically about the dreaded girl who discovers sudden powers and then, with no real training, manages to fight and defeat a 10,000-year-old, extremely powerful, experienced, skilled enemy, with no real explanation of how. It was ineffective, to say the least.

I could not relate to any of the characters. I did not feel any tension in the plotting. The ‘romance’ was insta-lust and never felt solid. But though the writing is really flat and not particularly engaging, it is structurally sound (minus some editing issues). There may be others who like this a lot more than me, but I’m calling it a fail.