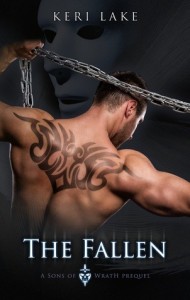 I downloaded a copy of Keri Lake‘s The Fallen from the Amazon free list. I believe it is permafree.

Description from Goodreads:
To catch the Fallen, you have to become the very evil you were bred to slay.Show loyalty. Be willing to go deep into the gritty underbelly of the world, where the vilest acts of human carnage thrive and seep into your mind like a black poison, consuming every part of you that was once good. Ignore your dark cravings and keep to the most important rule of all: never save the mortals.This is the life of a Sentinel. Some call us the toughest angels in the heavens. Unbreakable. But even the strong can break in the face of temptation. Human females have always been the forbidden fruit for our kind—an enticement I’ve resisted for centuries, until she came along. Karinna lusts for vengeance. She wants inside the darkness, where the Fallen own the corrupted streets of Detroit—the perfect bait to take down the biggest crime ring the city has ever known. I want her. To have her, though, I’ll have to break the rules. For one taste of the forbidden, I’ll have to commit the most heinous sin of all …

Review: **spoilerish**
I must have missed the memo. When exactly did the word erotica become synonymous with abuse? This is complete drivel—cheap thrills and post Fifty Shade of Grey crap with a paranormal twist. Seriously, it is one big rape fantasy and glorification of abuse.

The thing is, I can understand the rape fantasy part. I REALLY don’t enjoy reading them (in fact, I had to force myself to finish this one), but I understand women who do. I totally get facing that fear on safe pages and forcing it into something you can garner a little excitement and fun from instead of just a terror inducing real possibility. I get that.

What I don’t get it why women, WOMEN (of which Ms. Lake is just one of many) would continue to write all females as mindless, volition-less, disposable commodities who rather enjoy their own abuse, up to and including death and dismemberment (and starting in childhood). This book is littered with quotes like this:

This woman has suffered since the day she was brought into this world.” Hasziel cupped her cheek and smoothed his thumb over her skin. “It is the only place in which she finds comfort.”

What nonsense. This book even suggests that the female=tradable possession to be passed by a man to a man as reward belief exists even in Heaven. Wow, I bet that’s what every good Christian woman dreams of when she prays for those pearly white gates.

Of course, she comes to love and crave it as an illustration of how all women really only want to be dominated, hurt and broken (and what good are they then?) by the men they love. (Thus, all those other women who have been abused and killed in the book probably enjoyed their rapes and murders too.) While simultaneously regaining memories of being gang raped by her father and his cronies, as if to suggest that any woman who desires something different than monogamous, vanilla sex must already have been defiled in some fashion. You’d think these were mutually exclusive, but apparently not.

It’s horrid. I went into this knowing it was a dark read. I’m no prude and enjoy the darker side of fiction (that’s why I picked this book up in the first place), but that doesn’t mean I wanted to spend 200+ being told how worthless me and my pussy are. I mean the whole concept of this book is that Xander can torture and kill people regularly, he can get blow jobs from a mindless sex slave, he can break women into said slave, he can kidnap, whip, and abuse Karinna, all with no heavenly repercussions. But god forbid his penis enter her vagina, even in love, and he’s condemned to Hell for all eternity. We women apparently aren’t just worthless, our vileness is contagious.

And let’s not miss that it is essentially JUST women we’re talking about. Almost as an afterthought Kid’s are thrown in too (but one would presume they’re at least half girls to start with and who know when boys age out of the victimizable children’s group), but never, NEVER men. The book is very clear on this.

Nothing more stony and unapologetic than a bitter angel forced to leave the heavens—even demons avoided the Fallen. Humans, on the other hand, couldn’t avoid them if they tried. Every day, kids and females got snatched up from the streets like smelt in a shallow pond, drugged and used at the amusement of their sadistic captors.

I could write an essay on the distancing technique being used in the use of ‘female’ instead of women, girls or a name (it crops up a lot). But I’ll let that one go. What I really want to point out is that I’m always amazed that truly evil beings are still expected to adhere to strict heterosexual norms. Men are never victimised, be it in a any sort of homoerotic way or just, you know, basic power dynamics. Baffling.

To wrap this up, I’d like it noted that at no point have I used the world misogynistic. Misogyny being the hatred of women and girls, but the word is often thrown around willy-nilly whenever a book or character treats women badly. I never got the impression that the author or even any of the cruelly dismissive men in the book hated women. To hate someone (as an individual or gender grouping) requires caring enough to have an opinion about them. It elevates them at least to the level of ‘human enough to think about.’

No one here did that. In a sense, I think this is worse. Women weren’t hated. They were just not accorded any sense of human agency, or even faces as they’re all masked as well as apparently thoughtless automatons. They were, as a whole, mere shadows that men act upon. I’m holding out hope that sometime in the near future the female population will realise that we’re worth more than this.

The book did try to redeem itself at the end by punishing the bad guys, but it was too little too late for me and really the exact same story could have been relayed without dehumanising every woman…excuse me, female…to pass the pages. (And been a damn good book too.) I’m giving this two stars and the only reason it’s not a single star is that mechanically it’s fairly well written. I like a spot of erotica here and again. I even like a bit of dark erotica. But I don’t want to finish the book feeling like shit about being a poor, pitiful, potentialess, penisless, disposable victim…i.e. a woman.