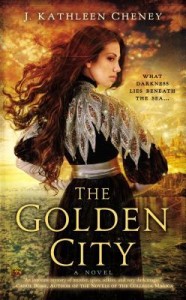 I won a paperback copy of The Golden City, by J. Kathleen Cheney from a Goodreads giveaway.

Description from Goodreads:
For two years, Oriana Paredes has been a spy among the social elite of the Golden City, reporting back to her people, the sereia, sea folk banned from the city’s shores….

When her employer and only confidante decides to elope, Oriana agrees to accompany her to Paris. But before they can depart, the two women are abducted and left to drown. Trapped beneath the waves, Oriana survives because of her heritage, but she is forced to watch her only friend die.

Vowing vengeance, Oriana crosses paths with Duilio Ferreira—a police consultant who has been investigating the disappearance of a string of servants from the city’s wealthiest homes. Duilio also has a secret: He is a seer and his gifts have led him to Oriana.

Bound by their secrets, not trusting each other completely yet having no choice but to work together, Oriana and Duilio must expose a twisted plot of magic so dark that it could cause the very fabric of history to come undone….

Review:
I’m pretty ‘meh’ about The Golden City. I liked the writing. The editing was fine. Finding it set in Portugal was a change from the regular US/UK based fiction one normally finds (though I’ve seen others comment it wasn’t accurate, I don’t know one way or another) and Selkie, Otterfolk and Seria were outside the norm magical creatures.

I even liked Oriana and Duilio. But I found them dull. Really, they seemed to exist in parallel plots that they then occasionally talked about. And they were so bound by social convention that there seemed to be no passion in them at all. And Oriana has to be the worst spy in history.

The mystery seemed shaky. Almost 50 people disappear and no one notices? I mean sure, employers might be oblivious, but did none of these people have families or friends that might report them missing? The great magic that was supposed to happen seemed questionable at best, though even the book admits that. And it all seemed to fall apart for no real reason at all. Oriana was still walking around as if no one was after her, and it didn’t seem anyone was despite claims to the contrary. Sure, Duilio dodged assassination attempts, but it’s Oriana that’s supposedto be in danger, but I never once felt that.

And I was distinctly dissatisfied with the ending. It’s not a solid HEA, which I don’t always have to have, but it felt like something had been left incomplete. In fact, what it felt very much like was an obvious tie-in for a sequel, which irks me.

All in all, I would call this OK, not great but not wholly bad either. I’d read a sequel if I came across it for free or could borrow it. But I doubt I’d spend money on it.