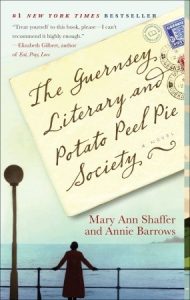 A copy of The Guernsey Literary and Potato Peel Pie Society

by Mary Ann Shaffer and Annie Barrows was left in my Little Free Library and I nabbed it.

Description from Goodreads:
January 1946: London is emerging from the shadow of the Second World War, and writer Juliet Ashton is looking for her next book subject. Who could imagine that she would find it in a letter from a man she’s never met, a native of the island of Guernsey, who has come across her name written inside a book by Charles Lamb….

As Juliet and her new correspondent exchange letters, Juliet is drawn into the world of this man and his friends—and what a wonderfully eccentric world it is. The Guernsey Literary and Potato Peel Pie Society—born as a spur-of-the-moment alibi when its members were discovered breaking curfew by the Germans occupying their island—boasts a charming, funny, deeply human cast of characters, from pig farmers to phrenologists, literature lovers all.

Juliet begins a remarkable correspondence with the society’s members, learning about their island, their taste in books, and the impact the recent German occupation has had on their lives. Captivated by their stories, she sets sail for Guernsey, and what she finds will change her forever.

Written with warmth and humor as a series of letters, this novel is a celebration of the written word in all its guises, and of finding connection in the most surprising ways.

Review:
Honestly, I absolutely adored this and I didn’t expect to. This is the book my book club chose this month. Despite possessing it for quite a while (it was put in my Little Free Library and no one had taken it yet), I had no real intention of reading it. A whole story told through correspondences—letters and telegrams—no, the idea did not appeal. But I’m committed to the club, so I gritted my teeth and picked it up…and couldn’t put it down.

I went on a weekend trip while reading this book. At one point my aunt and daughter were whispering and then laughing at me. When I finally looked up to see why, my aunt said, “We’re just saying how cute you are, over there reading your book and grinning to yourself.” I wasn’t aware of it, but yes, that’s exactly how this book made me feel. Happy.

I adored the characters and the style actually works with the letter-writing. I did think breaking form at the end and telling the climax in a diary style (instead of letter), was a poor choice and it was quite abrupt. But even that was excusable, since the whole thing just made me feel good. I 100% recommend it.

I’ve also learned there’s a movie being made of the book. (Maybe even made, though it’s not out in the US yet.)

As much as I loved the book, I’m wary of the idea of a movie. It’s not exactly action packed and the quaint language of the written word is what makes the book work. I just can’t see it doing well on screen. I hope I’m wrong on that one, the trailer looks good.