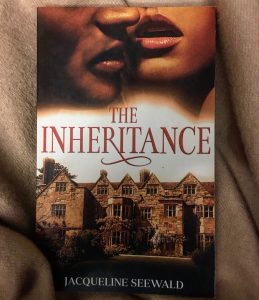 I won a copy of The Inheritance, by Jacqueline Seewald, through Goodreads.

Description:
Jennifer Stoddard is a 35-year-old widow who has just found out she is the sole heir of her grandmother’s estate, located in the midwest town she grew up in. But there is a catch; she must live in the house for two years before she can claim the estate and someone doesn’t want her there. The threats begin soon after her return. A rifle shot whizzes through her car window, her brakes are tampered with, and her tires are slashed. Police Chief, Grant Coleman, is called upon to investigate. Unfortunately, the history between Jen and Grant from high school causes them to mistrust each other. However, Grant is a professional and intends to do his job. Together they explore who might want to drive Jen out of the house, while trying to understand their feelings of anger, mistrust and desire for each other. With Jen’s life on the line, will they be able to put the past behind them to work together and save her and her son’s lives?

Review:
Not particularly original or well done. Characterization depends far too heavily on stereotypes. Names are used far too often in dialogue to feel natural, and names in the narrative are often first and last throughout the book, also not feeling natural.

There are two romances, where only one is needed. The first progresses only in that they clear up a misunderstanding from high school (one that was very obvious and persisted because they never spoke to one another again, despite being in the same class), but suddenly they’re all marriage and babies. The second, which is unneeded, seems to exist only to put the woman in the far too overused position of choosing between her successful and hard earned career and the love of a good man. Nope, I’ve neeevvvvveeerrr seen that used in a book before. Nope, it’s not trite and patriarchal. Nope, it doesn’t piss me off every time I see it. Oh wait, yes it does.

All and all, a flop for me. The book does have a pretty cover though.