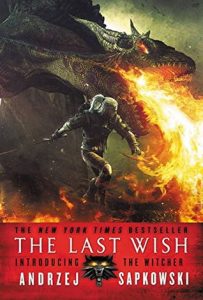 I borrowed a copy of  Andrzej Sapkowski‘s The Last Wish from my local library.

Description from Goodreads:
Geralt of Rivia is a witcher. A cunning sorcerer. A merciless assassin. And a cold-blooded killer. His sole purpose: to destroy the monsters that plague the world. But not everything monstrous-looking is evil and not everything fair is good… and in every fairy tale there is a grain of truth.

Review:
I have a confession to make. I didn’t really read the description of this book before I read it. I picked it up on a recommendation to read the series and chose this thinking it was the first book. Turns out it is actually a collection of short stories published after the series itself (though set before the timeline). In a sense I’m relieved to discover that, because I didn’t love them and the series is supposed to be so good. It’s a relief to discover that this book isn’t the one I should have been reading to get a real sense of the series. It’s disappointing, of course, that I read it and didn’t love it. But now that I’ve been set straight I’ll read the actual first book.

Now, setting aside my little fumble, lets talk about the stories. I think I’d have liked them a lot more if I had read the series first. I think a lot of what felt vague and shallow to me would have had context. But I did think there was a lot of humor and I liked the character a lot. I was a little annoyed with womens’ apparent habit of falling into his bed with no effort on his part (and their tendency to be villains or faceless/voiceless) and there is some anachronistic language that annoyed me. But all in all, I didn’t love it like I’d expected to but I didn’t hate it either. It’s about what you’d expect from decent early 90s epic fantasy.