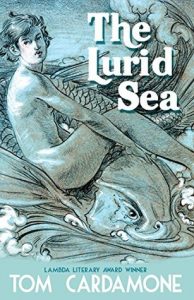 I requested a copy of The Lurid Sea

, by Tom Cardamone, through Netgalley.

The writing is very pretty and Nerites is a lot more introspective than you’d expect from a man cursed to suck cock for all eternity. (He doesn’t seem to do anything else). And though it takes a good 1/3 of the book for anything resembling a plot to develop (just long enough to fear there isn’t one and that the Fellatiolympics is the more noteworthy thing about the book), one does eventually. Not much of one mind you, but one does develop.

This feels like someone from an academic background trying to make porny incest, pedophilia, slave sex and debaucheries intellectual. Like we’re supposed to read it as meaningful, instead of base and onanistic. And if you don’t like it, well, you just must not be intellectual enough to look beyond its purposeful prurience and “get it.” Or maybe not truly gay enough. Sure, ok, whatever. I see it, but It’s not really for me. Because even with the pretty writing and some hot scenes, 140 pages of blow jobs gets boring. I struggled to finish it.

I know this is a personal preference kind of thing. I appreciate having the fantasy of at least minimally hygienic, consensual sex preserved (or not trampled on too badly). There were just too many times Nerites sucked a cock and tasted shit—rolled it around in his mouth and considered it, even—got peed on, was the recipient in Bukkake, reveled in smegma, was borderline raped (though he’s always up for it), had sex on a corpse, etc. etc. etc. I know that for every thing that wrenched me out of what little story there was with a shudder, there’s someone out there for whom that’s a kink (and good for them), I just NOPED out on all of it in one book, after a while. I could have taken any individual thing, just not all of them all together. No doubt, that was partly Cardamone’s intent, to push people’s boundaries. But…

I appreciate the pretty writing. I read the afterward and appreciate how many books the author references (though he claims not to have done too much research, a statement contradicted by the those same recommendations). I liked Nerites as a character. And if I hadn’t so often been squinked out, I might have liked the book. In the end, I’m sure it will find it’s audience, it’s just not me.