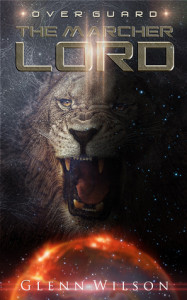 Author, Glenn Wilson, sent me a copy of The Marcher Lord.

Description from Goodreads:
Private Ian Kanters has just been initiated into the renowned ranger division of the Bevish Empire–a space-faring, Victorian-Era society. He is slightly apprehensive, however, as his first assignment is escorting a noble family on a hunting expedition. But their destination, the newly-acquired planet of Orinoco, quickly lives up to its wild reputation.The planet’s climate is harsh and the wildlife deadly. His company of rangers is also not nearly so easy to win over as he had hoped, though he finds the nobleman’s daughter to be unexpectedly distracting. But that’s only the beginning as they trek into the vast wilderness where Ian is soon to find the adventure that he’s been waiting his whole life for.

Review:
Um, where to start. The Marcher Lord is surprisingly well written and edited, considering it’s gotten almost no attention since it was published. I liked the main characters. I thought the side characters were pretty interesting. (I was especially fond of Rory.) The alien planet kept me interested and the military bits felt really believable. But, and it’s a big but, the book is missing something important, a plot.

Well, that’s not strictly true. I think there is a plot, it’s just so slow in developing that it’s sure to take about 2,000 pages or so to get to it, meaning that this book is not a complete work on it’s own. It barely feels like a prologue actually. The book is roughly 250 pages and, while there were a few vague hints at possible political intrigue, the only action that might (depending on how it’s explained in the next book) be described as plot-driven happens in the last 5 or so pages. The rest is just soldiers on safari.

In a way, it reminded me of Heinlein’s Starship Troopers. You go in expecting intergalactic sci-fi and instead find military fiction in space. Like Starship Troopers, the book is centred on a young, naive, idealistic new recruit sent out to an alien world to use all his military skills to fight non-humanoid prey. However, instead of being at war with an intelligent insectoid race, Ian and his cohort are escorting a noble on what amounts to as an African big game hunt.

That’s it. That’s the book. You spent time marching, hunting, fishing, eating, etc. In and among these really quite mundane activities you get to know Ian. He’s a really nice chap, Ian is. There’s one little twist in the female MC department, that I admit I didn’t see coming, but I also have to admit wasn’t well explained. (Someone’s attitude seemed to change inexplicably allowing Ian’s to change too.) There’s a little out of place religion. It’s part of the worldbuilding that this is a “space-faring, Victorian-Era society,” so by extension Christian. But it felt extraneous to the story. Similarly, given this is a galactic empire, it felt really simplistic that the few dominant cultures seem to only be Earthbound cultures (specifically English and French).  But there is also some interesting observations on humans and humanness.

All in all, not a bad book. Pleasant reading, but no real pay off in the end, unless you’re committing yourself to the whole series, all of which isn’t even available as far as I know. But it you liked Starship Troopers, I bet you’d like this.