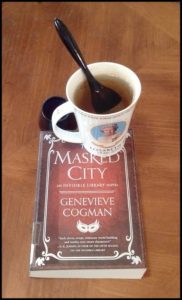 I borrowed a copy of Genevieve Cogman’s The Masked City from my local library.

Description from Goodreads:
Working in an alternate version of Victorian London, Librarian-spy Irene has settled into a routine, collecting important fiction for the mysterious Library and blending in nicely with the local culture. But when her apprentice, Kai—a dragon of royal descent—is kidnapped by the Fae, her carefully crafted undercover operation begins to crumble.

Kai’s abduction could incite a conflict between the forces of chaos and order that would devastate all worlds and all dimensions. To keep humanity from getting caught in the crossfire, Irene will have to team up with a local Fae leader to travel deep into a version of Venice filled with dark magic, strange coincidences, and a perpetual celebration of Carnival—and save her friend before he becomes the first casualty of a catastrophic war.

But navigating the tumultuous landscape of Fae politics will take more than Irene’s book-smarts and fast-talking—to ward off Armageddon, she might have to sacrifice everything she holds dear….

Review:
Darn it, this is the second book in a row that turned out to be a second in a series. Unfortunately, with this one I didn’t realize that it is a sequel until at least halfway through. It’s definitely followable without reading the first, I just had to overlook the references to action from book one. Doable, but annoying.

I generally really enjoyed this. I liked Irene as a heroine. I liked how it turned the damsel in distress trope on its head by having her save her male apprentice. Some of this was compromised by the fact that she had to beg a king and a male fae for assistance and a male side character came to her rescue, but in the end she rescued him too and carried the day (with the assistance of two men, but who’s counting). She was definitely the initiator of most of the action. Yay. I thought the dialogue was brisk and there was a lot of humor. But I thought the writing was repetitive and occasionally overblown.

I was consistently irritated to have the otherwise adult narrative interrupted by Harry Potter-esque magic, such as magical, inter-dimensional traveling wardrobes characters climb in and out of. And I flat out hated the Language (which is a magical ability). Every single one of her blunt magical directives read as cheesy and unbelievable, not to mention too convenient for comfort.

Perks for having women in positions of power, even if predominantly in the background, giving most the active authoritative positions to men. And extra perks for allowing for more than het seductions and the presence of at least one gender queer character.

Lastly, I would have liked one more chapter at the end, showing what happened to Irene once she returned to the library and faced her superiors, but I did enjoy the bonus content the reader is given instead. (Just not as much as I’d have enjoyed a little more wrap-up to the plot.)

What I’m drinking: Generic, loose-leaf green tea. As in, I put it in a pretty little tea tin and no longer remember where it came from or what brand it might be. As far as I’m concerned, it’s just green tea. It’s a nice brew though.