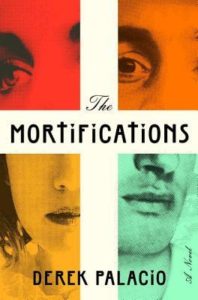 I received a copy of The Mortifications, by Derek Palacio from Blogging for Books.

Description from Goodreads:
In 1980, a rural Cuban family is torn apart during the Mariel Boatlift. Uxbal Encarnación—father, husband, political insurgent—refuses to leave behind the revolutionary ideals and lush tomato farms of his sun-soaked homeland. His wife Soledad takes young Isabel and Ulises hostage and flees with them to America, leaving behind Uxbal for the promise of a better life. But instead of settling with fellow Cuban immigrants in Miami’s familiar heat, Soledad pushes further north into the stark, wintry landscape of Hartford, Connecticut. There, in the long shadow of their estranged patriarch, now just a distant memory, the exiled mother and her children begin a process of growth and transformation.

Each struggles and flourishes in their own way: Isabel, spiritually hungry and desperate for higher purpose, finds herself tethered to death and the dying in uncanny ways. Ulises is bookish and awkwardly tall, like his father, whose memory haunts and shapes the boy’s thoughts and desires. Presiding over them both is Soledad. Once consumed by her love for her husband, she begins a tempestuous new relationship with a Dutch tobacco farmer. But just as the Encarnacións begin to cultivate their strange new way of life, Cuba calls them back. Uxbal is alive, and waiting.

Review:
This is what I would classify in my own taxonomy as a Book Club Book. It’s one of those books that takes itself very seriously, is beautifully written and every single person in it is miserable from start to finish. The specifics of their misery might change in the course of the book, counting as growth for a character, but everyone’s still miserable. That is The Mortifications  for you.

Despite how it might sound, I did like the book. More so now that I’ve finished than as I crawled through it. (It’s quite slow, inhabiting the characters mental space more than anything else.) But I can’t say reading it was as enjoyable for me as having digested the story as something to contemplate. I liked Ulises and Williams and I liked their relationship to the women in the novel. But the women are the objects of the book, while Ulises and, to a lesser extent Williams and Uxbal, are the subjects, in my opinion. And I could never quite wrap my head around the decisions and personalities of Soledad and Isabel.

The writing is beautiful, though entirely told, rather than shown—to such an extent that there are no quotation marks in the book. Nothing is said directly, the reader is just told that someone said something. It took a little while to get used to the style. But I did eventually and it was very cleverly done.

If you have a book club or happen to like book club books, this is worth picking up.