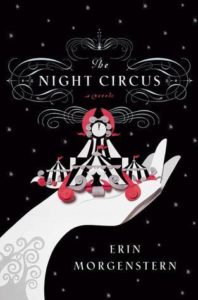 I picked up a hardback copy of Erin Morgenstern‘s The Night Circus somewhere. I’m not even sure where. I imagine I’m not the only one this happens to. Right? Right!?

Description from Goodreads:
The circus arrives without warning. No announcements precede it, no paper notices plastered on lampposts and billboards. It is simply there, when yesterday it was not.

Within these nocturnal black-and-white striped tents awaits an utterly unique, a feast for the senses, where one can get lost in a maze of clouds, meander through a lush garden made of ice, stare in wonderment as the tattooed contortionist folds herself into a small glass box, and become deliciously tipsy from the scents of caramel and cinnamon that waft through the air.

Beyond the smoke and mirrors, however, a fierce competition is under way–a contest between two young illusionists, Celia and Marco, who have been trained since childhood to compete in a “game” to which they have been irrevocably bound by their mercurial masters. Unbeknownst to the players, this is a game in which only one can be left standing, and the circus is but the stage for a remarkable battle of imagination and will.

As the circus travels around the world, the feats of magic gain fantastical new heights with every stop. The game is well under way and the lives of all those involved–the eccentric circus owner, the elusive contortionist, the mystical fortune-teller, and a pair of red-headed twins born backstage among them–are swept up in a wake of spells and charms.

But when Celia discovers that Marco is her adversary, they begin to think of the game not as a competition but as a wonderful collaboration. With no knowledge of how the game must end, they innocently tumble headfirst into love. A deep, passionate, and magical love that makes the lights flicker and the room grow warm whenever they so much as brush hands.

Their masters still pull the strings, however, and this unforeseen occurrence forces them to intervene with dangerous consequences, leaving the lives of everyone from the performers to the patrons hanging in the balance.

Review:
This is one of those books that has been on my radar for a long time and a lot of my friends loved it. I thought it was ok, though I certainly see what its die-hard fans love so much. It’s very descriptive and has a pleasant, sedate narrative pace that is easy to fall into.

But as a reader, I most appreciate getting to know characters deeply and the only character I felt I knew well in this book was the circus. Every detail seemed to be described. And it’s pretty to read, but I wish the same attention had been lavished on the living, breathing, human characters and their interrelationships. I never felt I knew them well enough to care particularly about them.

Similarly, leaping back and forwards in time, which is just what this book does, personally always annoys me. There’s nothing wrong with either of these things. It just meant I wasn’t an overly happy reader, even if I could objectively see that it is a cleverly written book.

In the end, I thought it was a fine book, just not one that matched my own preferences well.