Recently my husband and I decided it was time to get a dog. Up until a couple of years ago we had an amazing German Shepherd/Black Chow mix named Blackie. We adopted him from the Humane Society and loved him as a practice child. When he died he took a little bit of our collective soul with him. Now 2+ years later and with the children big enough to understand the concept of not terrorising any animal brought into the home, we agreed that it would be a joy to have a four-legged friend again. Thus began the search for our next family member.

My other half really wanted an Akita. He loves their stoic demeanour and guardian natures. While I think them beautiful, I was a little wary of their reputation of being dangerous to children outside of their own family. As a compromise I agreed we could have one if we got it as a puppy so that we could ensure it was properly trained and socialised from day one. I did allow myself a little internal groan. It would fall to me to house train it and we would all have to survive the chewing phase. But it would be worth it in the end. I was sure.

A complication however was that as set as he was on an Akita I was set on rescuing an animal. We even tried compromising by contacting the local branch of the Akita rescue. They however had no puppies in need of re-homing. There were also no local puppies available from reputable breeders old enough to adopted yet, even if I did give in on getting a rescue.

We stood at a bit of a stalemate. It would be three weeks before the puppies he had verified weren’t from any sort of puppy mill and came from a well mannered dam would be available for purchase. He agreed that if I found THE DOG before then we would bring it home, if not he would have his little Akita fur ball and I would have a new challenge.

We scoured the Humane Society, ASPCA, Animal Control, etc websites daily. I even checked Craigslist regularly, looking for the one. And then it happened! Sitting in the very first cage at the Animal Control Centre was a beautiful (if a little matted) adult red husky. He was the one! I just knew it. I felt the same way when I found Blackie. He stopped me in my tracks, literally. My husband tells me my bottom lip came out like some petulant child who’s not going to give in. Well, there I was again. Looking at a dog I simply couldn’t walk away from.

That Saul gave in to me probably speaks volumes about how well he know me. I would never have forced the issue. Adopting a dog has to be a mutual decision, but saying ‘no’ to your wife when she really wants something isn’t an easy thing for any good man to do. Since bringing him home and naming him Diefenbaker he has been a complete joy. He is approximately 5 years old (yea no house breaking for me) and considerably calmer than you might expect. The vet says that’s the difference between a 5 year old husky and a 2 year old husky. We simply couldn’t be happier.

Here he is. Everyone, please welcome Diefenbaker, or Dief for short. 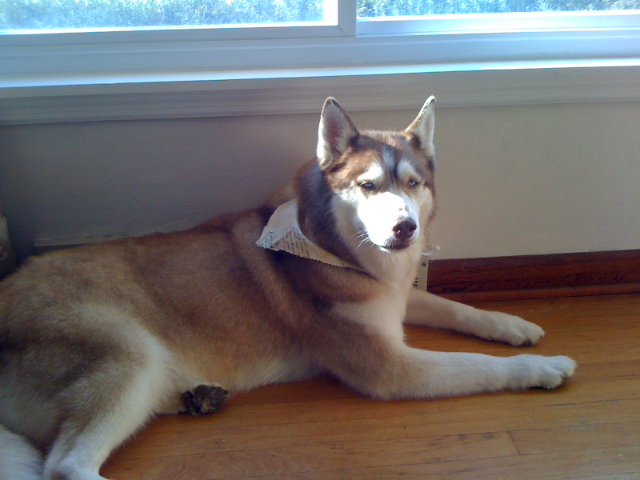 Needing a little refresher on dog training we picked up Patricia B. McConnell’s The Other End of the Leash: Why We Do What We Do Around Dogs and since I’m the prolific reader in the family I gave it a read. So glad I did.

Description from Goodreads:
The Other End of the Leash shares a revolutionary, new perspective on our relationship with dogs, focusing on our behavior in comparison with that of dogs. An applied animal behaviorist and dog trainer with more than twenty years experience, Dr. Patricia McConnell looks at humans as just another interesting species, and muses about why we behave the way we do around our dogs, how dogs might interpret our behavior, and how to interact with our dogs in ways that bring out the best in our four-legged friends.…

Review:
This is a amazingly well written and informative book. Dr. McConnell’s writing style is easy to read and enjoyable. I have to admit (somewhat shamefacedly) that prior to reading it I would have thought of Applied Animal Behaviourist as one of those ‘you do what’ kind of jobs. What do we really know about animal psychology anyway, and what makes you or anyone else more informed on the matter than me? Well I would have been wrong. Dr. McConnell’s book is well researched and based on more than simple anecdotal evidence. I learned a lot from it.

It isn’t a training book per se, though there are a decent number of training tips, how to redirect unwanted behaviours for example. This is primarily a book about what makes people people and dogs dogs. The main message is that we aren’t the same. We are different species, with different needs and wants, and different interpretations of the same behaviours. Understanding this can make a world of difference in the lives of dog and their humans…or humans and their dogs. This should be required reading of all new dog owners.