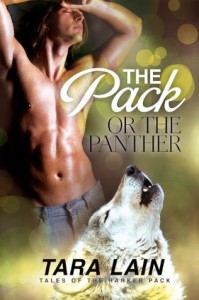 I bought a coy of the Pack or the Panther, by Tara Lain.

Description from Goodreads:
Cole Harker, son of an alpha werewolf, is bigger and more powerful than most wolves, tongue-tied in groups, and gay. For twenty-four years, he’s lived to please his family and pack—even letting them promise him in marriage to female werewolf Analiese to secure a pack alliance and help save them from a powerful gangster who wants their land. Then Cole meets Analiese’s half-brother, panther shifter Paris Marketo, and for the first time, Cole wants something for himself. When Analiese runs off to marry a human, Cole finally has a chance with Paris, but the solitary cat rejects him, the pack, and everything it represents. Then Cole discovers the gangster wants Paris too and won’t rest until he has him. What started as a land dispute turns into World War Wolf! But the bigger fight is the battle between cats and dogs.

Review:
Goodness, I’ve had rotten luck lately in the book department. I’m not one of those ‘find fault with everything’ readers. I promise I’m not. But this one ticked very few boxes in my ‘likely to love it’ listing.
The writing itself is fine. It seemed pretty well edited and Cole is to die for. He’s an endearing mix of big, tough alpha wolf and tongue-tied, flustered, cutie. Oh, and there are some cool side characters. I liked Cole’s best friend Lindsay, though it was pretty darned convenient that he had so many connections and could do all the save-the-day type things he could. But I liked him. And it was pretty awesome that Cole’s mom is so kickass on her own. But that’s where my praise ends. I hated Paris. He was like some amped up caricature of a sassy, slutty (in the fun way, if you know what I mean) bottom. He was selfish and a lot of his issues weren’t well explained. He seemed to be damaged in some way, but claimed to have had a happy life. Then there was the sex. OMG, the sex. It was just wrong, in so many ways. It was effortless, crude, rushed and the things they said…cringe. I’m embarrassed for them and that’s before I factor in the howling. No, it didn’t do it for me. I didn’t find it arousing AT ALL.Then there was the sappy, ‘everyone apologises and tells them how great they are’ ending. I mean it’s great that Cole’s parents finally came around, but that whole scene in the new house was hard to swallow—like trying to drink straight agave. Not happening. And the twist at the very end? It made no sense. Why keep that hidden throughout the whole book? I can think of a number of times that ability would have smoothed already difficult situations.So, on the whole this is a fail for me. There were things I appreciated and, again, the writings ok. But on my ‘personal preferences’ list it didn’t score well.