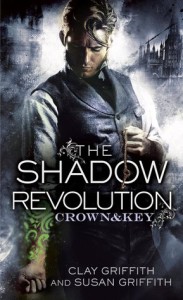 1 thought on “Review of The Shadow Revolution (Crown & Key #1), by Clay & Susan Griffith”