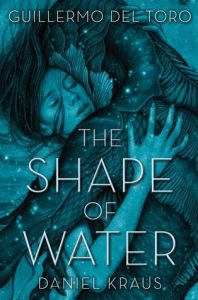 Description from Goodreads:
It is 1962, and Elisa Esposito—mute her whole life, orphaned as a child—is struggling with her humdrum existence as a janitor working the graveyard shift at Baltimore’s Occam Aerospace Research Center. Were it not for Zelda, a protective coworker, and Giles, her loving neighbor, she doesn’t know how she’d make it through the day.

Then, one fateful night, she sees something she was never meant to see, the Center’s most sensitive asset ever: an amphibious man, captured in the Amazon, to be studied for Cold War advancements. The creature is terrifying but also magnificent, capable of language and of understanding emotions…and Elisa can’t keep away. Using sign language, the two learn to communicate. Soon, affection turns into love, and the creature becomes Elisa’s sole reason to live.

But outside forces are pressing in. Richard Strickland, the obsessed soldier who tracked the asset through the Amazon, wants nothing more than to dissect it before the Russians get a chance to steal it. Elisa has no choice but to risk everything to save her beloved. With the help of Zelda and Giles, Elisa hatches a plan to break out the creature. But Strickland is on to them. And the Russians are, indeed, coming.

Review:
I’m surprised at how much I enjoyed this. While I understand this was developed along-side the movie, not based on it, I usually find book from movies quite shallow. So, I wasn’t expecting much. Which means the depth and shades of grey in this book was a pleasant surprise. I loved the writing style and characters, especially Giles. Plus, how so many characters crossed paths without ever knowing it.

It wasn’t faultless. I found it’s message, while admirable, too bluntly relayed. It was a bit in your face. And Strickland’s mania went too far, much farther than needed anyhow. Having said that, as much as I detested him (of course I did), he was also one of my favorite characters. Favorite in the sense that there was the most to him. He was horrible, just a monster. But he was also profoundly broken and trying desperately to unfuck himself (but too dysfunctional to have any hope of succeeding or recognizing that fact). I’ve not seen the movie. But I wonder if they could have brought this to the screen without his internal monologues. Lastly, I thought the ending, while predictable, wrapped it all up a little too nicely. (Unless of course you read the whole thing to have been orchestrated by Deus Branquia in order to get from South America to New York to find Elisa, which after the last scenes I kind of do. That brings an element of sacrifice I appreciate. )