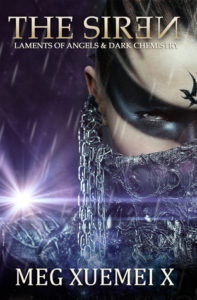 I picked up a free copy of The Siren (by Meg Xuemei X) at Amazon.

Description from Goodreads:
Two boys tied to her irrevocably. One offers life disguised as death; the other leads to death with unfathomable love. Her choice decides whether the world turns or ends.

Lucienne Lam, born to rule as the last of the Sirens, is running out of time. If she fails to find the TimeDust, an ancient power, her enemies will have their wish—her head on a spike. And she’ll never know the love promised by Vladimir, a fierce warrior of the Czech royal bloodline.

Except Ashburn, a genius ‘farm boy,’ has found the TimeDust first, and its power binds Lucienne to him. She must convince him to sever this forced bond so she can return to her first love. But breaking the link seems insurmountable when the TimeDust launches its own ominous agenda and the two boys prepare to duel to the death over her.

Review:
Not great. Not super bad either, but not particularly good.

Here’s my issue with it. It feels VERY much like it was written as a serial. The chapters are episodic and there is a certain amount of repetition that suggests plot recaps. Plus, since it is (or feels like it is) a serial, it doesn’t actually end. Reading this was very much like watching a television show that you follow, but only catch every other show. You know the plot, but bits are missing that you just have to roll with. Characters showed up with no history or explanation, simply inserted in the plot. Characters who had existed suddenly have hobbies or habits that the reader is never told about until they are incorporated. Even the romance happens off page and feels like it’s just been grabbed willy-nilly.

The whole ‘it must be a serial’ feeling is exacerbate by the fact that the book’s blub isn’t accurate to the events of this book. I can see how some of that might come up in the next, but it doesn’t here. The book ends before it gets to, “She must convince him to sever this forced bond so she can return to her first love. But breaking the link seems insurmountable when the TimeDust launches its own ominous agenda and the two boys prepare to duel to the death over her.” Nope, that doesn’t happen IN THIS BOOK. Looks like the author chose at least one less episode for this volume and one or more for the next…or just doesn’t know where the ongoing story split for the ‘books.’

The result of all this is a group of characters I didn’t feel I knew well, a romance I wasn’t invested in, a plot that feels fragile and anchor-less and a book with little beginning and no end.

I also had serious trouble believing that these were teens. They spoke, had skills and acted much older. Even worse were the flashbacks when the main character was supposed to be a child. It was nowhere near believable, even for a genius. Plus, she was just too smug to like and too perfect at everything.

The writing itself is fine. But as a BOOK, with all the elements a reader expects in a BOOK, it’s kind of a barely pass.