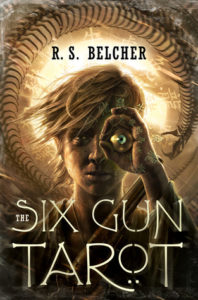 I borrowed a copy of The Six-Gun Tarot , by R. S. Belcer, from my local library.

Nevada, 1869: Beyond the pitiless 40-Mile Desert lies Golgotha, a cattle town that hides more than its share of unnatural secrets. The sheriff bears the mark of the noose around his neck; some say he is a dead man whose time has not yet come. His half-human deputy is kin to coyotes. The mayor guards a hoard of mythical treasures. A banker’s wife belongs to a secret order of assassins. And a shady saloon owner, whose fingers are in everyone’s business, may know more about the town’s true origins than he’s letting on.

A haven for the blessed and the damned, Golgotha has known many strange events, but nothing like the primordial darkness stirring in the abandoned silver mine overlooking the town. Bleeding midnight, an ancient evil is spilling into the world, and unless the sheriff and his posse can saddle up in time, Golgotha will have seen its last dawn…and so will all of Creation.

Review:
So, I liked a lot of this book but the rest fell flat for me, largely because it just seemed to go on forever, with a ton of flashbacks and too many characters.

I thought the story was really interesting and intricately plotted. I liked how everything linked together. I liked a lot of its mysticism and philosophy. I liked the characters themselves. I liked the writing.The inclusion of several religions, though Christianity seemed predominant, was interesting. You don’t come across too many Mormon characters. I liked that, despite being part of a series, it felt complete. There are plenty of good things about it.

Unfortunately, there was the rest. Like I said, too long and too many characters, but also anachronistic language as the norm. Editing that seemed to fall apart any time the sole gay couple came on-page, but only when they were on-page. (Was someone too uncomfortable to do their job?) Also, the conclusion left me wondering about the logistics of what exactly happened. It all irked me.

But mostly, as a women, I was struck by the off-hand sexism of the book. There were mindless, zombie drones who had no volition, ability to reason or speak EXCEPT for the ones who could threaten to rape women. Seriously, these creatures were shambling idiots for 300+ pages and the only time they seemed able to speak or even think was to threaten women with rape. Yeah, sure Mr. Author, seems like a great idea to throw a little random violence toward women in, even if it breaks the cannon established by the rest of the book.

Similarly, I appreciate that a well-trained warrior woman was included. Too bad you had to turn around and take it all away from her, leaving her a broken, sniveling, shell of herself, so that she could be with a man. Is it completely inconceivable that she could be powerful and skilled, but also loved?

Or, gosh, since I’m examining the women of the story, how about the primary female victim/villain having to be violently, ritualistically and beastialy raped and called a whore to gain her power? And why was she angry enough to throw herself into danger and become the primary victim/villain, in the first place? Well, what’s the most cliché, over-used answer you can think of? That’s right, because her man didn’t love her enough and she wanted to get his attention. The only other women in the book were saints or dead. Period. Dude, seriously, you might want to examine your biases.

So, while I enjoyed a lot of this book. I wanted it to be over about a hundred pages before it was and the longer I thought about it the more I found to dislike.