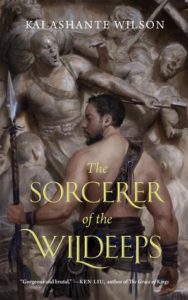 I borrowed The Sorcerer of Wildeeps, by Kai Wilson, from my local library.

Description from Goodreads:
Since leaving his homeland, the earthbound demigod Demane has been labeled a sorcerer. With his ancestors’ artifacts in hand, the Sorcerer follows the Captain, a beautiful man with song for a voice and hair that drinks the sunlight.

The two of them are the descendants of the gods who abandoned the Earth for Heaven, and they will need all the gifts those divine ancestors left to them to keep their caravan brothers alive.

The one safe road between the northern oasis and southern kingdom is stalked by a necromantic terror. Demane may have to master his wild powers and trade humanity for godhood if he is to keep his brothers and his beloved captain alive.

Review:
Oh wow, I did not expect to not like this book. I loved A Taste of Honey and expected to love this too. It just wasn’t to be!

First off, the writing is beautiful. It’s very poetic. But, BUT all that poetry is at the cost of clarity. So many times I read passages and didn’t know what they meant or what was actually happening. I was constantly confused about the timeline, unsure if what I was reading was a flashback or something happening in the future or where I might be in between.

Second, there are the dialects the characters use. Now, I read an article by Wilson in which he talked about how important it is to him to include certain speech patters in his writing. He talked about cultural and linguistic hierarchies and such. And in general I don’t have a problem with this, applaud it even. But some of what was used in this book worked and some just felt painfully anachronistic, worse it’s a fantasy setting that might not even be on Earth. So some of the language just didn’t fit at all, even if I saw what the author was trying to do.

And then there was the ending; the did he or didn’t he, obscure, unsatisfying, probably tragic ending. Nope. That was the last straw for me. I appreciated the diverse characterization, the lovely cover and am open to more of Wilson’s writing, but this book was not a winner.