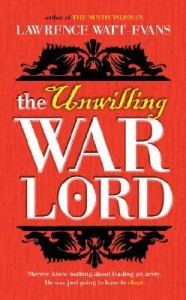 I assume I bought a copy of The Unwilling Warlord (by Lawrence Watt-Evans) at some point. But I could be wrong. I’m not entirely sure where this paperback copy came from. Maybe it was my husbands or a guest left it here at some point. Either way, it was on my shelf. And as I’m trying to clear some room for new books I went ahead and read it.

Description from Goodreads:
When the foreigners confronted Sterren in Ethshar of the Spices he was uneasy; when they all but abducted him, taking him to an obscure kingdom in the south, he knew he was in a terrible predicament.

A predicament some might actually find appealing — he was by heredity the Ninth Warlord of Semma, least of the small kingdoms; he was a noble, and his rank afforded him material privileges, even in a place as insignificant and obscure as Semma.

But the office also carried certain terrible responsibilities: he was to win the war the stupid King had stirred up by his arrogance. Two larger and stronger Kingdoms were preparing to invade Semma.

And if the country lost, the first thing likely to be forfeit was the life of the Warlord.

And if it won . . . if it won, the fate and shape of Ethshar would change forever.

For deep in the south there are secrets of magic not even Sterren can imagine.

Review:
This is one of those books that I’ve had on my shelf so long that I don’t even know where it came from. I also didn’t know it was third in a series when I picked it up to read. Maybe I was missing some things, but it seemed like I was able to follow it without problem. And it was amusing. It’s basically about a guy who finds himself in a series of ridiculous situations and finds his way out of them. The problem was that even though I chuckled regularly, I never found myself overly interested in it. It never quite reached the point of exciting. So, I basically thought it was ok.