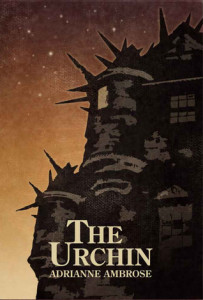 I nabbed a copy of Adrianne Ambrose’s book, The Urchin, from the Amazon free list.

Description from Goodreads:
Since the End came, leaving the United States a confused and desolate wasteland, what is left of society has been trying to pick up the pieces and put itself back together. Nick Miller is willing to do whatever it takes, and is flying a top-secret mission over the devastation when he is forced to make a crash landing. Luckily, he is rescued by the brooding, enigmatic Vance Amherst and his dubious crew of teenage boys, who are eking out an existence in the remains of their boarding school. But Nick quickly realizes that something is very wrong at Stanton Academy: the school has been turned into a fortress bristling with giant spikes; the boys, armed to the teeth with wooden stakes, exude a desperate, fearful discipline; the teaching staff is conspicuously absent. And night is falling…

Review:
I was quite impressed by this book. I can’t say I liked all of it, I never quite warmed up to Nick, for example, but I enjoyed the read. I loved Vance as a lead and Johnny as a motivating side character. Some of the other boys also really snagged my heart, most notably Martin.

I also liked the idea of a group of ~8-17 year old boys surviving in a vampire infested, post-apocalyptic America. They’re barely fending off a shift toward Lord of the Flies-like behaviour. Really, just one boy/man is standing between them and self-destruction and then one incredibly selfish boy/man drops out of the sky, decides he knows what’s best for all of them and disrupts the balance, leading to chaos and ruin. Lending a bit of admirable grey to the story is the fact that his motives are selfish, but he’s also not entirely wrong.

I’m always thrilled to find a little room for moral ambiguity in a story and Nick provided that, as did the ending. Was it a happy one? It depends on whose ending you’re looking at. I think Vance and Johnny had a happy ending, probably Nick and Dave, too. But Martin and the boys? Maybe not so much. It’s hard to say for sure and I like that a lot.

I did have an issue with…well, how to say this without a spoiler…there was a deception at one point and the perpetrator of this deception has to act in accordance with it, obviously. But we’re treated to his internal dialogue, which also runs along the same lines of the deception. It was unbelievable to me that he would internalise it to the point of even thinking to himself as if he’s done as he’s pretending. Yes, it more effectively led the reader to believe the lie, so that the reveal is not totally obvious, but if you think about it, it feels wrong.

The book was also in need of further editing. It was readable and I’ve definitely seen worse, but there were some copy edit mishaps, some head-hopping and one scene (with Dave, under the trebuchet) that doesn’t seem to correlate to the rest of the book. It might have been a dream (or an act, maybe), but if so, I don’t know whose.

All in all, however, Ambrose is a most impressive writer and I’ll be looking for more of her work.