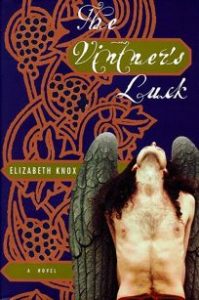 I purchased a physical copy of The vintner’s Luck, by Elizabeth Knox.

Description from Goodreads:
One summer night in 1808, Sobran Jodeau sets out to drown his love sorrows in his family’s vineyard when he stumbles on an angel. Once he gets over his shock, Sobran decides that Xas, the male angel, is his guardian sent to counsel him on everything from marriage to wine production. But Xas turns out to be a far more mysterious character. Compelling and erotic, The Vintner’s Luck explores a decidedly unorthodox love story as Sobran eventually comes to love and be loved by both Xas and the young Countess de Valday, his friend and employer at the neighboring chateau.

Review:
I have a confession to make. I have a secret soft spot for trashy novels. You know the sort—shallow, not particularly thought provoking, usually cheesy enough to make me snort-laugh—the literary equivalent of late night, B-grade sci-fi. The problem with such books is that they so often overlap with books I would call trash—poorly written, weakly plotted, the cheese isn’t purposeful or snort inducing. Lately, a disappointing percentage of my reading has fallen into that latter category and I decided I needed, NEEDED something with some substance. This book came highly recommended and boy did it fill the bill.

It isn’t a book you just fall into. It’s choppy, whole years sometimes covered in a page or one single event representing an entire year, as the narrative flies through Sobran’s WHOLE life. (But I have to add that the prose is stunningly beautiful.) It’s often confusing. It’s sad. It has a dubiously happy ending. But it’s also heart-felt and evocative. I teared up more than once. While I didn’t love the book until about 2/3 of the way through, by the end it had me wholly wrapped around itself.

I’ll admit that the narrative style made the characters feel distant and the large gaps in time that the characters spent apart made it difficult for me to feel their love, but I never doubted it. It just took on a form I had to think deeper to grasp. And I don’t just mean the love between Xas and Sobran. There are several types of love shown between different characters in the book, though often subtly and unremarked upon. Also, because so many chapters are presented as mere vignettes, I often was left scratching my head at the significance of certain events.

Most unusual of all, I rather enjoyed the religious aspects of the book. Xas’ relationship to/with God and Lucifer, as well as his purpose between them was intriguing. I never felt preached at, as I don’t think anyone ever preached.

All in all, I needed the ‘See, I can read smart books too’ reboot and had the added bonus of truly enjoying the read. I’m well up for more of Knox’s writing in the future.

For an alternative view, from someone who didn’t like the book but whose points I can completely take and largely agree on, check out this review. Isn’t interesting how two readers can agree on not liking certain aspects of a book, but still come away with different final verdicts.