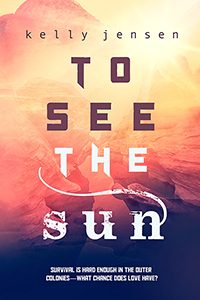 I received a copy of Kelly Jensen‘s To See the Sun through Netgalley.

Description from Goodreads:
Life can be harsh and lonely in the outer colonies, but miner-turned-farmer Abraham Bauer is living his dream, cultivating crops that will one day turn the unforgiving world of Alkirak into paradise. He wants more, though. A companion—someone quiet like him. Someone to share his days, his bed, and his heart.

Gael Sonnen has never seen the sky, let alone the sun. He’s spent his whole life locked in the undercity beneath Zhemosen, running from one desperate situation to another. For a chance to get out, he’ll do just about anything—even travel to the far end of the galaxy as a mail-order husband. But no plan of Gael’s has ever gone smoothly, and his new start on Alkirak is no exception. Things go wrong from the moment he steps off the shuttle.

Although Gael arrives with unexpected complications, Abraham is prepared to make their relationship work—until Gael’s past catches up with them, threatening Abraham’s livelihood, the freedom Gael gave everything for, and the love neither man ever hoped to find.

Review:
I thought this was really lovely. There wasn’t a lot of action, most of the tension being either in someone’s fear something might happen or in the two men tiptoeing around getting to know one another, but it was nice. Jensen’s writing is beautiful and there was a happy ending for all, except the baddies (who predominantly remained faceless).

I did side-eye the gendered representation of the men though. I don’t mean to suggest all men have to be giant paragons of masculinity, but in the face of jokes about Gael being purchased as Bram’s “wife,” the fact that he’s the physically smaller of the two and excelled at cooking, cleaning and sewing (and genre-wise, came with a kid and was the one that needed to be rescued) almost made him feel uncomfortably misgendered.

At least Jensen was scrupulous about consent, both spoken and unspoken, even when one partner didn’t initially understand that the other was protecting him in this regard (or that he needed it). She broke convention in not only allowing the smaller man to ‘top,’ but even addressing the ridiculous trope that it’s always the bigger man that does.

I also appreciate that both men were a little older, Bram being almost 50 and Gael 29. Plus, Bram was just one of the most lovable leads I’ve read in a while. So were Geal and Aavi, but Bram stole the show for me. All in all, I really loved this. I don’t hand out a lot of 5-stars, but To See the Sun deserves one.