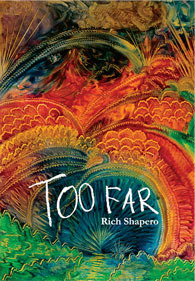 I won a paperback copy of Rich Shapero‘s Too Far

Description from Goodreads:
Rich Shapero’s Too Far follows an ultra-imaginative pair, Robbie and Fristeen, through a transformative summer spent exploring the woods behind their remote Alaskan homes. As their family lives become increasingly unstable, the characters travel deeper and farther into their private world. The forest—and the gods who inhabit it—becomes their refuge until, at summer’s end, they are forced to choose between the crushing prospects of the real world, and the lethal demands of their ideal one.

Review:
Almost three years ago, I won a copy of the book in a giveaway, but I put off reading it because it generally has very poor reviews. (Averaging 2.8 and change on both Amazon and Goodreads.)

After reading the book and a number of those poor reviews, I think I have an explanation. I notice that an awful lot of those reviewers state that they had been given a copy of the book for free on their college campus. Now, I don’t know Shapero and I’m hypothesizing, but this seems to have been one of Shapero’s marketing techniques.

I can see why he might have gone that route. This is a book that speaks in symbolism and says a lot with what isn’t said. And I can follow the logic that a bunch of university students, still immersed in deconstructing the classics and, I don’t know, reciting Byronic verse or something might be a good audience for this type of literature. However, it ignores the fact that college campuses are also full of 22-year-old Engineering students, and football scholarship recipients, and any number of students that don’t fulfill the description of literati.

I mention all of this because, though I didn’t find myself a fan of the book, I think some of the poor reviews can be taken with a grain of salt as having been solicited from the wrong audience. (Not that that makes them less than legitimate, but the overwhelming number of poor reviews could stem from the book only making it into the hands of people who weren’t likely to enjoy it.)

Now, why didn’t I (a literati at heart) enjoy the book? Because I thought it was overwritten and indulgent on the author’s part. As I mentioned, it’s all symbolic. The children create a world of their own to deal with the troubles in their lives and much of it mimics those same troubles. But so very much of it is presented as actually happening, while the reader is left to remind themself that it’s only fantasy that it just feels like a drug fueled escapade. It felt as if the author used the excuse of everything being symbolic to go hog-wild and write anything he wanted. I wouldn’t be surprised to find much of it doesn’t actually mean anything, we’re just supposed to assume it does.

This was especially apparent when one looked at the language and the emotional, developmental and intellectual maturity of the kids. I understand the characters are six to maintain their innocence in a way older children could not, but nothing in these children’s behavior, language or understanding was that of a six year old and most definitely the narrator’s vocabulary wasn’t. It was envy-worthy.

Beyond that, there is a definite feel of Robbie being a MAN and Fristeen being WOMAN that just shouldn’t be there. It shows up in everything from who speaks, to who leads, to who makes decisions, to who comforts or protects whom. I know children are culturally indoctrinated early, but this was far too strong for children so young. It simply felt artificial.

And on a personal note, I was consistently annoyed by the patronizing was Robbie and his father treated and spoke about his mother. Mental health issues or not, there was a problem there.

I will say that the book is well edited. I don’t remember a single error catching my attention and I think Shapero really just wants to write poetry, because though the story as a whole was a fail for me, the actual writing is beautiful.