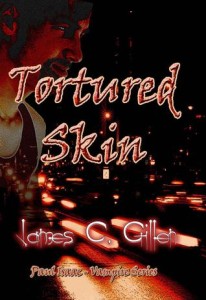 In January of 2013 I downloaded a copy of Tortured Skin, by James C. Gillen, from the Amazon free list. I read it now as part of a TBR reading challenge in which I’m making an effort to read books I’ve owed more than two years.

Description from Goodreads:
When Paul Isaac, vampire executioner, is confronted by the master vampire of the city and poisoned with a virus that will not only kill him, but cause him to rise as one of the undead, he must decide whether to do the bidding of the powerful vampire to save his own life, or stop the sadistic killer that threatens to leave the city with more unfortunate victims. Packed with crucifixes, stakes, and a Magnum filled with ultra-violet bullets, Paul uncovers a sinister club that caters to the dark side of pleasure and pain that might not only be the key to his survival, but also push him closer to the killer’s identity. In order to stay alive, he must learn to face his inner darkness and trust in things that just might be less monstrous than himself.

Review:
While reading this book I went back and forwards about whether I was enjoying it or not. The writing was fine, as was the editing. My problem was that I chose it because another reviewer said, “Interesting series – fans of Laurell K. Hamilton’s Anita Blake series and Kim Harrison’s Rachel Morgan series will find similar elements and should like this one.”

But then it hit me. Tortured Skin is LKH and KH-like fiction for men! What it lacks in any romantic subplot it makes up for in violent bravado. I think a third of the book is just Paul making threats at people or people threatening him and AT LEAST half the book is him enacting those threats or surviving other’s violence toward his person.

Did I like it? Not particularly, but then I’m not a man. I went in expecting a male version of Anita Blake or Rachel Morgan and got a vampire hunting Dirty Harry instead.

The thing is that a lot of the trash talk, violence and cold-heartedness that I appreciate in female characters, as a twisting of gender norms, just comes across as asshole-like on a man. Paul is not a likeable guy. He doesn’t even pretend to try to be and I disliked him as a result.

I also discovered a whole new pet peeve in reading this book, books that don’t give you a description of a character and then drop things in willy-nilly. This book never gave a single, solid description of Paul (though I know what every outfit and woman’s figure looks like) but at ~10% tattoos were mentions. At ~20% a goatee was mentioned. Then, at ~45% his bald head was mentioned, by which point it was far too late to try and alter the image I had created in my head for the character and I found myself jerked out of the story.

The same could be said for the world building. It’s pretty sketchy. Religious icons worked against vampires, but they didn’t have to ask permission to enter homes. I never came to terms with which myths were being used and which discarded. For example, after the werewolves and vampires being enemies for the whole book, the author introduced a vampire’s ability to call on and control werewolves at the 90% mark. What?

Lastly, I never quite understood the point of the coverup that led to the events of the book. Vampires killed people left and right, so why the individual deaths in question were so important was a mystery to me. It left me skeptical of everything.

All in all, while this wasn’t a winner for me, I think guys (who are more prone to appreciate an overly macho, emotionless hero) will probably quite enjoy the book.