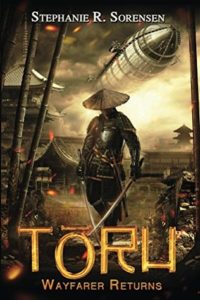 I received a copy of Toru: Wayfarer Returns, by Stephanie R. Sorensen, from Netgalley.

In Japan of 1852, the peace imposed by the Tokugawa Shoguns has lasted 250 years. Peace has turned to stagnation, however, as the commoners grow impoverished and their lords restless. Swords rust. Martial values decay. Foreign barbarians circle the island nation’s closed borders like vultures, growing ever more demanding.

Tōru, a shipwrecked young fisherman rescued by American traders and taken to America, defies the Shogun’s ban on returning to Japan, determined to save his homeland from foreign invasion. Can he rouse his countrymen in time? Or will the cruel Shogun carry out his vow to execute all who set foot in Japan after traveling abroad? Armed only with his will, a few books, dirigible plans and dangerous ideas, Tōru must transform the Emperor’s realm before the Black Ships come.

Review:     Slightly spoilerish
I was totally let down by this one. Even when I tried to give it leeway as a YA book, I was disappointed. I honestly don’t know what all the rave reviews and awards are based on.

That cover is awesome and I love both steampunk and stories of feudal Japan. Unfortunately, this book failed on both fronts. It’s not really steampunk, despite a couple dirigibles and it’s only Japanese in title.

While it’s set in Japan and uses Japanese words and talks about Japanese society, all of the characters are essentially westernized. For example, Toru talks about being uncomfortable with the loud brash American women. However, the only prominent female character we’re given is…you guessed it, loud and brash. She troops around in men’s clothing, often found signing bawdy drinking songs with the blacksmith and fighting with a naginata. Hardly the paragon of demureness we’re told to expect. People talk outside their station, are more direct than should be, etc. We’re told about Japan, but not provided a Japanese story.

Further, the books presents as if in praise Japanese culture, but the whole plot hinges on the westernization of the country and destruction of their age-old way of life. Everything from the environment, to the social hierarchy, to women’s place in society is challenged and discarded in exchange for a western style. They even chose western uniform styles for their military. This basically subtly shows the old to be it to be less ideal than what it is becoming, therefore the East is shown to pale in comparison to the West, which I believe goes against everything the book claims to be trying to do.

Outside of the heavy ethnocentrism of it, the plot simply stretches believability and credulity too far. Toru spent two years as a castaway in America. Somehow without connections he was a guest of the rich and powerful, giving him access to military information, schools, businesses, apparently everything. Plus, he learned and perfected accentless English. Then he returned home and engineered a total industrial revolution in less than a year. Again, as a nobody with less than no connections; he was condemned to die. But he still convinced an entire nation to commit treason. And everyone just basically decides to go along with it, at the risk of death, all like, “Hmm, sure, sounds like fun. Here is access to all my money and resources, have at it.” Then, despite his lack of station and being one among many on a battlefield, he disobeys direct orders, acts on his own and of course saves the day with no repercussions. Apparently he’s the only intelligent, forward thinking person in all Japan. Gah, irritating.

The writing suffers from classic show vs tell problems, its repetitive and predictable, the language is painfully anachronistic and the characters are flat. In the end, I had to force myself to finish it.