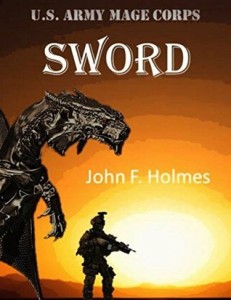 I downloaded a copy of  U.S. Army Mage Corps: SWORD, by John F. Holmes, from the Amazon free list. At the time of posting, it was still free.

Description from Goodreads:
What if … magic were part of every day US Military Operations?

In a backwater Central Asian Country, a threat to Western Civilization is growing, unnoticed by the world. The men and women of the US Army Mage Corps, feared on the battlefield and despised back home, enter into a struggle which may cost them their lives and their country.

Review:
This is another case of interesting concept, poor execution. Basically, I liked the characters, though they were never deeply developed. I liked it idea of magic in the modern army and honestly, the army bits are well done. But the story stops and starts, jumps around and isn’t particularly developed. There are also no limits or descriptions of the world or the magic, so creatures and abilities just seem to pop up willy-nilly. The writing is simplistic, POVs shift without warning and the editing is a mess.

I’m actually going to take a moment to address this last point, because I downloaded my copy of the book on May 11, 2015 and there is an author note on Goodreads saying, “As of 09/25, heavily edited to fix mistakes.” One would presume 9/25/2014. This is supported by a comment on an Amazon review in which the author states, “Uploaded a much edited version. Thank you for the comment.” That was Nov 3, 2014. So, I can only assume I have that newly edited edition. Now, Holmes may have fixed some errors, maybe even ‘heavily edited’ it, but there is no way this book has been in the hands of a professional editor. There are still a ton of mistakes, some of them things like zeros showing up in the middle of words. Things a standard spell-check should have caught.

So, in the end I think the book could have been better…maybe even could have been good. But it’s not there yet. It’s too rushed, there isn’t enough explanation of the magic limits, and there are too many characters and POVs to feel invested in the characters. Meh.