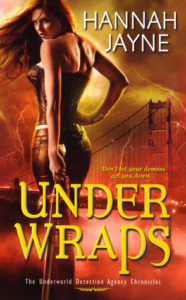 I borrowed a copy of Hannah Jayne‘s Under Wraps from my local library.

Description from Goodreads:
Sophie Lawson 32, human narrator, sees through magic veils, works for the Underworld Detective Agency below San Francisco Police HQ. Her boss Pete is a handsome werewolf – missing. Her roommate Nina is a fashionista vampire with teen nephew Vlad. Her new partner gorgeous detective Parker Hayes is not what he seems. A killer takes eyes, blood, hearts – is Sophie next?

Review:
You know, I read a lot and I don’t like everything I read. In fact, I seem to be having a stunningly bad year for books. Ive read very few books that I thought wonderful (though those that I loved, I really LOVED), a lot of mediocre ones and have DNFed more books than ever. But there haven’t been many that I can say that I thought the writing was fine but I disliked every character in the book. I can say that about <i>Under Wraps</i>. I have to even.

I thought the heroine was whiney and TSTL, and her primary characteristic seemed to be her ineptitude. I thought the hero a complete jerk-face. He was smug, sexist, patronizing and constantly insulting. The BFF was just as bad. She was basically heartless, unrepentant when her actions hurt others and used the heroine as a doormat. The sole character in the book I liked died a pointless death that contributed nothing to the plot.

Speaking of plot, the whole books is supposed to be solving a mystery. But instead of solving it it just reaches a point where the villain steps forward and conveniently explains the whole thing. No agency on the part of the heroine contributed to solving the crime. She spends far more time inexplicably mooning over the man who laughs at her when she is angry than contributing anything useful.

Lastly, I have to address the cover. I understand the challenge of stock photography and cover designers, etc. But this cover is a straight up LIE. This book is not an Urban Fantasy with a kick-butt heroine, as the cover suggests. She never holds a sword. The closest she comes if being threatened by one. And the character that model is supposed to represent is a mousy administrative assistant who shows more passion about being called a secretary than anything else. Plus, she describes herself as having ‘Brillo pad curls,’ “5’5″ when standing on a phone book,” with pale skinned, and explicitly says she doesn’t look good in a leather bustier. There is literally nothing on that cover that isn’t wrong.