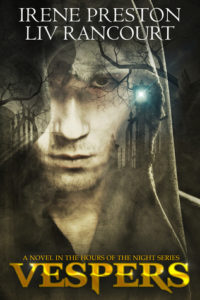 I received an e-ARC of Vespers, by Irene Preston and Liv Rancourt, for review.

Description from Goodreads:
Thaddeus Dupont has had over eighty years to forget…

The vampire spends his nights chanting the Liturgy of the Hours and ruthlessly disciplines those unnatural urges he’s vowed never again to indulge. He is at the command of the White Monks, who summon him at will to destroy demons. In return, the monks provide for his sustenance and promise the return of his immortal soul.

The 22-year-old college grad just moved across the country to work for some recluse he can’t even find on the internet. Sounds sketchy, but the salary is awesome and he can’t afford to be picky. On arrival he discovers a few details his contract neglected to mention, like the alligator-infested swamp, the demon attacks, and the nature of his employer’s “special diet”. A smart guy would leave, but after one look into Dupont’s mesmerizing eyes, Sarasija can’t seem to walk away. Too bad his boss expected “Sara” to be a girl.

Falling in love is hard at any age…

The vampire can’t fight his hungers forever, especially since Sara’s brought him light, laughter and a very masculine heat. After yielding to temptation, Thaddeus must make a choice. Killing demons may save his soul, but keeping the faith will cost him his heart.

Review:
There is so much to appreciate about this book. I thought both the main characters were cute in their own subtle ways. I liked that Thaddeus was an incredibly unreliable narrator. His view of his situation was so colored by his religious beliefs that he couldn’t see himself clearly. I liked that one of the characters was Hindu, from an Indian family, and his outsider’s view of Catholicism was by far my favorite part of the book. I liked that his religion was presented as equally valid and that it was allowed to be so without him being strictly adherent to it. I liked the dual viewpoints. I liked the heroism and the action.

However, as much as I appreciated all that, I never truly felt I was enmeshed in the lives of these characters. I always felt a step removed from them and the events of the novel. I also thought a couple characters who popped up and then disappeared felt like loose ends, Sara had a couple TSTL moments and the book ended VERY ABRUPTLY. It’s not a cliffhanger, just sudden.

But for the most part, I enjoyed this and will be looking forward to book two.