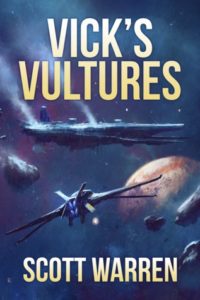 I won a paperback copy of Vick’s Vultures, by Scott Warren, through Goodreads.

Description:
In the far future, alien technology captured by the Union Earth Privateers has fueled Earth’s tenuous expansion from a single planet to a handful of systems across the Orion Spur.

Victoria Marin, captain of the U.E. Condor, and her crew of Vultures have been running dry for months. In danger of losing her command and her credibility if she can’t locate fresh salvage, she locks onto the distress signal of an alien ship in hopes of valuable cargo. What she finds instead is First Prince Tavram, the heir apparent to one of the largest empires in known space. Tavram’s ship has been crippled after narrowly escaping an ambush and his would-be assasin is coming to finish the job.

The Vultures launch a high risk mission to rescue the prince and recover every last scrap of xenotech they can before the hunter catches up to his prey. But there are more dangers than notorious interstellar assassins when it comes to ferrying an alien prince across the stars, and Victoria must contend with dangerous alliances, old grudges, and even her own government if she means to bring her crew home alive. Whether she succeeds or fails, the consequences of her choices will affect the path of all humanity.

Review:
Vick’s Vultures was a complete surprise. I wasn’t 100% sure what to expect when I started it, but I’ll assure you it wasn’t gripping writing, fun characters, an interesting universe (or two) inhabited by a slew of differing alien creatures and cultures, all of it fitting together almost seamlessly. And it darned sure wasn’t a kick-butt female captain that wonderfully walked the line in which she was definitely a woman, but that never eclipsed her being a captain, nor did the author feel the need to butch her up so much she just became a dreaded man with boobs. Thank you Scott Warren for that! Characters really can be female and professional, who knew?

I did think Best Wish’s loss of control toward the end a little too convenient to believe and I occasionally had a little trouble understanding the techno-speak. But all in all, this was a fabulous read.