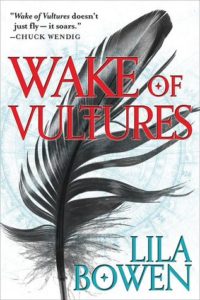 I borrowed a copy of Lila Bowen‘s Wake of Vultures from my local library.

Nettie Lonesome lives in a land of hard people and hard ground dusted with sand. She’s a half-breed who dresses like a boy, raised by folks who don’t call her a slave but use her like one. She knows of nothing else. That is, until the day a stranger attacks her. When nothing, not even a sickle to the eye can stop him, Nettie stabs him through the heart with a chunk of wood, and he turns into black sand.

But her newfound sight is a blessing and a curse. Even if she doesn’t understand what’s under her own skin, she can sense what everyone else is hiding — at least physically. The world is full of evil, and now she knows the source of all the sand in the desert. Haunted by the spirits, Nettie has no choice but to set out on a quest that might lead to her true kin… if the monsters along the way don’t kill her first.

I found this quite enjoyable. The main character is a gender-fluid, probably bi-sexual of 16 and I liked her a lot. She was uneducated, but (with one exception which I’ll discuss) never stupid. I liked the world and the magic system. I liked the side characters and the conversational writing. For the most part I really enjoyed this.

I do have three criticisms though. The first is simply that it dragged in the middle. The second, is in and around Nettie’s discovering her gender and sexual identity, the book fell into didacticism. Perhaps being YA the author felt younger readers might need education, but as an adult I just wanted to move on.

The last complaint is a bit of a feminist rant on female sexuality. Throughout the book Nettie reiterated repeatedly that she wasn’t just a girl, she wanted to be treated as a man (though she never fully dismissed femaleness in her head). Part of this was simply an attempt to protect herself in a world where women are at risk simply by existing as woman, but some was honest gender fluidity. She also repeated that she’d managed not to be raped, which given her exceedingly unprotected status was fairly amazing.

However, there came a single instance in which she had to disclose and discuss having a female body with another. A couple people had seen through her disguise previously, but there was no need to negotiate acceptance with them. With the circumstance I’m referring to she had to convince another character that he should accept her even though he’s discovered she is a physically female, but still keep treating her as a male. In doing so she established her male persona fairly firmly.

The very next thing she did, however, was decide to use her femaleness and sex as a commodity to be bargained with, almost getting herself raped in the process and forcing the reader through a lengthy fear-of-violent-rape scene. This was abrupt and out of character, considering how hard she’d worked to never let it show.

But more importantly, in a book that had until that point treated Nettie as something more than her vagina (and focused on this heavily) it felt very much like a betrayal to suddenly turn around and do just that. And even if someone wanted to try and use the rape-was-a-reality-of-the-time-that-should-be-acknowledged-and-included argument, which is one I hate as rape is so much more prevalent in woman’s fiction than in the real world, the book started with an attempted rape of Nettie. So, that particular necessity had already been accomplished. To a large extent I lost a significant chunk of respect for the book in this one protracted scene. It so cripplingly undermined the very theme and impact the book was striving for.

Anyhow, I had three complaints, the last of which was a doozy for me. But for the most part I really enjoyed it and will be looking for more of Bowen’s work.