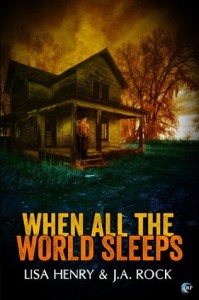 Netgalley granted me a copy of Lisa Henry and J. A. Rock‘s novel, When all the World Sleeps.

Description from Goodreads:
Daniel Whitlock is terrified of going to sleep. And rightly so: he sleepwalks, with no awareness or memory of his actions. Including burning down Kenny Cooper’s house—with Kenny inside it—after Kenny brutally beat him for being gay. Back in the tiny town of Logan after serving his prison sentence, Daniel isolates himself in a cabin in the woods and chains himself to his bed at night.

Like the rest of Logan, local cop Joe Belman doesn’t believe Daniel’s absurd defense. But when Bel saves Daniel from a retaliatory fire, he discovers that Daniel might not be what everyone thinks: killer, liar, tweaker, freak. Bel agrees to control Daniel at night—for the sake of the other townsfolk. Daniel’s fascinating, but Bel’s not going there.

Yet as he’s drawn further into Daniel’s dark world, Bel finds that he likes being in charge. And submitting to Bel gives Daniel the only peace he’s ever known. But Daniel’s demons won’t leave him alone, and he’ll need Bel’s help to slay them once and for all—assuming Bel is willing to risk everything to stand by him.

Review:
I’m torn on how to review this book, because the bottom line is that I didn’t particularly enjoy it. There were a lot of things that simply rubbed me the wrong way, and I’ll be outlining some of those below. But I also have to concede that it’s relatively well written. I especially liked the dialogue and Daniel/Bel’s use of small town grammar (even more so, Daniel’s tendency to try and correct himself). The problem is that most of the actual story left me cold, but those who don’t share my tastes and distastes might enjoy it.

To start with, I thought it was unidimensional. Yes, Daniel had a horrible condition; yes, something horrible happened to him; yes, he did something he’s deeply ashamed of in response; yes, he’s terrified he’ll do something similar again. I get all that, but there is NOTHING to him but his condition and its aftermath. The man has no thoughts outside of it. He’s so focused on how to control it, or have it controlled that he completely infantilizes himself. He reduces himself to little more than a weak, snivelling child and I found him incredibly off putting as a result, not to mention lacking in other aspects of basic humanity.

I was also confused about the timeframe of events. I’ll admit I might of missed something (but if it’s obfuscated enough for me to miss it, it’s still a problem), but Daniel is 4 years older than Bel. Bel was still working his high school job when the fire happened, suggesting he had to be 18 or younger making Daniel early twenties at the time. During the time of the current events of the book, Bel is 23 and Daniel 27. But at some point Daniel is supposed to have left Logan for university (one would presume a 4 year degree) and had a several year long relationship with someone, spent 8 months in jail and served most of his parole time. The years don’t seem to add up.

The closest I can figure, the fire had to happen at least during if not before Daniel left for college. Which leaves me wondering how he was functional enough to live in a dorm and graduate; even with the whole ‘safeguards’ he utilised. There’s no indication that the college boyfriend or roommate were dealing with Daniel’s nightmares, so he either was holding it together better or the beating/fire hadn’t happened yet. Because he isn’t functional enough for that at the time of the story’s events, leaving me wondering what changed.

Lastly, while I’d never be so naïve as to suggest that heartbreaking bigotry doesn’t still exist in small town America, Logan’s small mindedness seemed especially exaggerated. Am I really supposed to believe that NOONE in the WHOLE town, even Daniel’s own family, was willing to stand up to Kenny and his cohorts or speak out and do the right thing or be progressive enough to simply accept homosexuality—even all those men hanging out in the Greenduck? No one? Everyone seemed just a little too willing to condemn Daniel for being gay and forgive all their murderous good ol’ boys.

All in all, probably a fine text but I found it too much hard work to enjoy. I don’t like snivelling MCs. I didn’t enjoy any of Daniel’s masochistic tendencies and certainly not those of the first few chapters. And I didn’t understand Bel’s determination to stand by Daniel anyway. Not a real winner for me, I’m afraid.