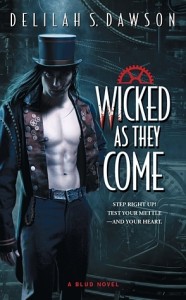 I bought a copy of Wicked as the Come, by Delilah S. Dawson.

Description from Goodreads:
When nurse Tish Everett forced open the pesky but lovely locket she found at an estate sale, she had no idea she was answering the call of Criminy Stain, from the far off land of Sang. He’d cast a spell for her, but when she’s transported right to him, she’s not so sure she’s ready to be under the spell of another man. (It didn’t go so well last time with controlling, abusive, domineering Jeff.) If only Criminy wasn’t so deliciously rakish….

Half the inhabitants of Sang are Pinkies—human—and the other half are Bludmen, who in Tish’s world would be called vampires. But they don’t mess with any of the bat/coffin/no sunlight nonsense. They’re rather like you and me, just more fabulous, long living, and mostly indestructible. (They’re also very good kissers.) But when the evil Mayor of Manchester (formerly Bludchester) redoubles his efforts to rid Sang of the Bludmen once and for all, stealing Tish’s locket in hopes of traveling back to her world himself for reinforcements, Criminy and Tish must battle ghosts, sea monsters, wayward submarines, a secret cabal, and thundering Bludmares to get the locket back and allow Tish to return home…but has she found love with Criminy? Could she stay in Sang forever?

Review:
Meh, I found it unimpressive. It wasn’t bad. The world-building was pretty good and there was some humor. But it just was nothing new or exciting either.

I think the author was going for a strong determined heroine, but she just came across as selfish and stubborn to me. She also did a lot of crying and sleeping. There was a POINTLESS and BASELESS love triangle for a little while. I didn’t understand Criminy’s obsessive love for woman he just met. I thought the bad guy was cheesy and she defeated him too easily. But most of all I thought the whole thing felt random. They ran here and did this. Then, they ran there and did that. Then, they ran into this creature or interesting contraption. I was not overly impressed. If my library carries the books, I’d probably read another but I’m not buying any more.