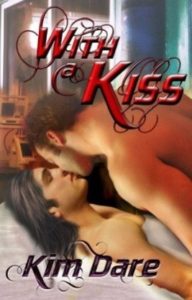 I picked up a copy of Kim Dare‘s With a Kiss when it was free on Amazon.

Description from Goodreads:
When Liam Bates volunteered to visit lonely patients at his local hospital, he expected them to be able to talk back when he chatted to them. But, when he’s assigned to visit a comatose man, he soon finds himself spilling out his whole life story in an effort to fill the silence. It’s not long before the peace and comfort he finds in the man’s hospital room becomes Liam’s refuge from an increasingly hostile world.

Vampire Marcus Corrigan has been trapped inside his paralyzed body for over three years, unable to communicate with anyone. The chatty young man who visits Marcus quickly captivates him, and Liam’s softly spoken words soon have him determined to rescue the boy from his current life, but, unable to move a muscle, all Marcus can actually do is lay there and listen.

Review:
I decided to give this a chance, despite its frankly appalling cover. OMG, so bad. Luckily, the book is better than it looks. I thought the writing especially good and the editing fine. I even liked the storyline and appreciated that the effects of trauma weren’t magically swept away, for either character.

Similarly, while I liked that Liam showed PTSD-like characteristics, I thought his desire to submit was handled well in general, and I liked Marcus’ confusion on how to help him sometimes, I got tired of him acting and being treated like a child. Eventually he stopped feeling like a man with a traumatic past and on-going issues to deal with and more like a frightened rabbit instead. It made it hard to see them as any sort of equal party in the relationship.

Lastly, there was what I thought to be a fairly large plot hole. What caused Marcus’ coma was eventually shown to be something well known in the vampire community, which would suggest it’s solution was known. In fact, it turned out to be fairly simple. So, why was he left to languish in a hospital?

So, I’ll call this book a partial success for me. I’d read another Dare book, but I can’t say this one lit me on fire.