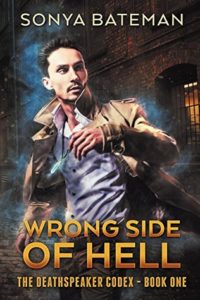 I requested a copy of Sonya Bateman‘s Wrong Side of Hell from Netgalley, but it turned out I actually already had a copy I’d picked up at Amazon. Oops.

Description from Goodreads:
Hauling dead people around Manhattan is all in a day’s work for body mover Gideon Black. He lives in his van, talks to corpses, and occasionally helps the police solve murders. His life may not be normal, but it’s simple enough.

Until the corpses start talking back.

When Gideon accidentally rescues a werewolf in Central Park, he’s drawn into the secret world of the Others. Fae, were-shifters, dark magic users and more, all playing a deadly cat-and-mouse game with Milus Dei, a massive and powerful cult dedicated to hunting down and eradicating them all.

Then a dead man speaks to him, saying that Milus Dei wants him more than any Other. They’ll stop at nothing to capture him and control the abilities he never knew he had.

He is the DeathSpeaker. He is the key. And he’s not as human as he thought…

Life was a whole lot easier when the dead stayed dead.

Review:
I really quite enjoyed this. I found it a fun, action-packed romp through NYC’s paranormal population. Now, I also found it unrealistic, in that a group of seven took on an almost limitless enemy organization but, well, that’s part of the fun isn’t it? Who doesn’t love rooting for the underdog?

I though Gideon an interesting character and I liked his narrative voice quite a lot. Similarly, I liked the side characters, though I thought some of them could have been a little more fleshed out and the villainous cult they pitted themselves against could have done with a bit more depth. They felt evil for the sake of evil, instead of dedicated to a cause. All in all, however, I will happily read more of Bateman’s books.