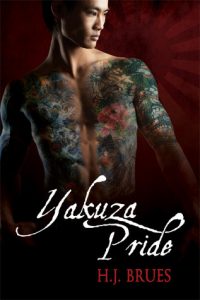 I borrowed Yakuza Pride, by H. J. Brues, from Hoopla.

Description from Goodreads:
When yakuza underboss Shigure Matsunaga meets Kenneth Harris at a boring social event, he’s surprised to find himself attracted to the blond gaijin with the mismatched eyes. Shigure is even more pleased when he discovers Ken not only speaks Japanese fluently, but is fluent in Japan’s ways, even the more violent of the martial arts. Ken’s expertise at kendo is not his most striking quality—it’s the passion beneath his quiet, almost fragile exterior that ignites Shigure’s lust, and the two come together as explosively as they spar.

Shigure is a dangerous man in a dangerous position. He’s been trying to keep the peace with the Daito-kai—his hated rivals—but the danger on the streets is escalating, threatening those Shigure most wants to protect. He may claim to love his gaijin, but before he can keep Ken safe, Shigure will have to overcome hostility from his people, a hidden enemy, and, the most insidious opponent of all, his own hard-won pride.

Review:
I suppose this could just be a matter of taste, since the writing seemed fine, but even being a bit of a Japanophile, I didn’t care for this book much. I thought it was far too long and there was way too much sex for the amount of plot it contained. Further, the large chunks of exposition in the middle of the too frequent and often too long sex scenes were just annoying. Honestly, I skimmed the last two sex scenes completely.

But worst of all, I disliked the style. The book was meant to be based in Japan with one character being Japanese and the other being a gaijin, a foreigner, in this case American, but one who grew up in Japan and is fluent and familiar with the culture. So, it’s meant to be seen as from inside Japan and Japanese culture. But the author’s insistence on including Japanese words, that then had to be defined, pushed the reader into outsider, gaijin territory. Creating an uncomfortable distance for the reader. This was heavily reinforced by the way the characters were referred to as ‘the American,’ the yakuza,’ ‘his lover,’ ‘the gaijin,’ ‘his gaijin,’ etc, especially during the sex scenes, when a reader should ostensibly be as close as they can get to the characters. I dearly wanted names.

I don’t know anything about Brues and his/her bio doesn’t specify, so I could be wrong. But I would strongly suspect they are not Japanese. That’s how this book felt, like a Westerner trying to write a Japanese book. Even if they are obviously informed on the culture, it still felt like an outsider’s perspective.