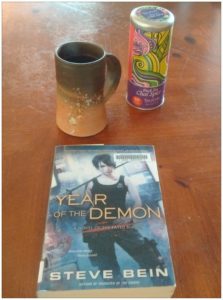 I borrowed Steve Bein‘s Year of the Demon from my local library. I have thousands of books on my Kindle and I still can’t help going out and finding more.

Description from Goodreads:
Detective Sergeant Mariko Oshiro has been promoted to Japan’s elite Narcotics unit—and with this promotion comes a new partner, a new case, and new danger. The underboss of a powerful yakuza crime syndicate has put a price on her head, and he’ll lift the bounty only if she retrieves an ancient iron demon mask that was stolen from him in a daring raid. However, Mariko has no idea of the tumultuous past carried within the mask—or of its deadly link with the famed Inazuma blade she wields.

The secret of this mask originated hundreds of years before Mariko was born, and over time the mask’s power has evolved to bend its owner toward destruction, stopping at nothing to obtain Inazuma steel. Mariko’s fallen sensei knew much of the mask’s hypnotic power and of its mysterious link to a murderous cult. Now Mariko must use his notes to find the mask before the cult can bring Tokyo to its knees—and before the underboss decides her time is up….

Review:
This is a hard one for me to rate because I didn’t read the first (Daughter of the Sword) and I don’t know how many of my complaints are the result of that. For example, I knew Mariko carried over from book one, but until I finished this book and glanced at some other reviews, I didn’t realize one of the historical characters does too. Certainly, I followed and enjoyed it, but my largest issue was that I didn’t feel like the three plot lines converged in any way, such that I felt like I’d read three partial stories instead on one cohesive whole.

Sure, they all involved the sword and mask, but that’s the only connection and surely in the 500 or so years between the events, other people held them too. So, why these particular stories? Kaida’s arc seemed especially anchorless. Would this have been different if I’d read book one? Maybe. But since the two books are apparently in the same style, jumping between the past and present, I’m thinking not. I just might have more faith that the plot lines will connect in some future book.

I very much liked the characters. There is some parallels between Mariko and Daigoro’s situations and the difficulty of doing the honorable thing. I liked that sex was dealt with very matter-of-factly. The writing is lovely, though a bit repetitive, with some editing mistakes (most notably, I think in some of the dates, as they made no sense). Despite being set in Japan, having a few Japanese words thrown in here and there and people bowing, the narration and dialogue didn’t sound particularly Japanese. This was especially notable in the historical dialogue. I liked it and its obvious the author did a ton of research, but it felt very American.

All in all, I suppose I liked but didn’t love this book. But I feel like I really aught to have.

What I’m drinking: Tea of Life Black Chai. I’ve been drinking it plain, not milky, which is my preference. But I find chai from a tea bag is never strong enough to make a nice milky version.