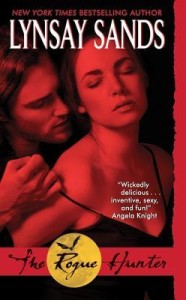 I picked up a used copy of The Rogue Hunter, by Lynsay Sands, at Goodwill.

Description from Goodreads:
Samantha Willan is a workaholic lawyer. She’s grateful for some rest and relaxation in cottage country, and after a recent breakup she wants to stay as far away from romance as possible. Then she meets her irresistible new neighbor. There’s something strange and mysterious about his eyes. Is it just her imagination, or are they locked on her neck?

Garrett Mortimer is a rogue hunter. His last assignment united Lucian Argeneau with his lifemate, and Mortimer is hoping this one will be less…adventurous. He’s here to track down a reported rogue, but fun in the sun is every bloodsucker’s nightmare. Worse, he can’t seem to get his mind off Samantha, especially when he spies her skinny-dipping in the lake. After eight hundred years as a bachelor, is he ready to turn a volatile attraction into a lasting love affair?

Review:
What nonsense did I just read? I mean really, what was this supposed to be? What it was was boring and basically a failure as both a PNR and a decent mystery.

Let me start with the fact that all of the characters are paper thin—no significant history, no real emotional depth, no obvious beliefs or thoughts outside of the immediate. In fact, for most of the book the side characters just went off by themselves and left the H & h alone. So, why bother with them?

There was also almost no world-building. What little there was, explaining vampires, came at about page 300! This is probably because the book is labeled as “The Rogue Hunter (Argeneau #10) (Rogue Hunter #1).” Someone tell me what that is supposed to mean. Is it the tenth Argeneau book or the first Rogue Hunter book? Because after reading it, I’m 100% certain it can’t be both.  While I could follow the plot, it was always painfully apparent I was missing something. The world-building, as stated, wasn’t there. Probably because it was in the 9 previous books. People were referenced that the reader didn’t know,  I strongly suspect Mort was a side character form another book, etc. So, as a 10th Argeneau book, it might have been successful (I don’t know as I read it as the first Rogue Hunter book), but as a first in a series, it’s a failure.

Now let me address the mystery around the rogue that Mortimer is supposed to be hunting. This investigation literally takes up about 20 pages of this 373-page book and then it’s solved with anti-climatic aplomb. Let’s be honest, Sands didn’t set out to write about a rogue vampire and the hunters who go after it. It is just the device used to get the two characters in the same place at the same time. Disappointing to the extreme. I’d have preferred the man to have just been on vacation and Sands not to even bothered with the half-assed attempt she made at pretending this book is anything other than a romance (which is pretty sad because the romance is pretty weak too).

The romance? CHEESY! There is the cliché immediate recognition of one’s life mate (that somehow turns the tough, broody Mort into a bumbling social throwback), the fragile female in need of assistance with, you know, walking, stupid antics to get around telling the truth, the convenient ability to change people’s mind if they ask inconvenient questions (thereby negating any possible narrative tension), and true immortal love and loyalty developing in a mere two weeks. What’s more, the whole book is essentially a tease. Over and over Sam and Mort almost have sex, but don’t quite manage it. Redundant…and PREDICTABLE!

This book is little more than a collection of weak PNR tropes, and none of them were executed particularly well. But worse than any of that, is the fact that I was bored for 373 pages. This sort of book is the epitome of why I refused to read romance for 30 years of my life. I’m in no hurry to read another Lynsay Sands book. How the heck does dreck like this get published over some of the great indies I’ve read?