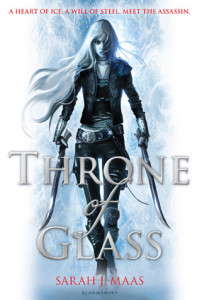 I grabbed a copy of Sarah J. Maas‘ Throne of Glass from my local library.

Description from Goodreads:
After serving out a year of hard labor in the salt mines of Endovier for her crimes, 18-year-old assassin Celaena Sardothien is dragged before the Crown Prince. Prince Dorian offers her her freedom on one condition: she must act as his champion in a competition to find a new royal assassin. Her opponents are men-thieves and assassins and warriors from across the empire, each sponsored by a member of the king’s council. If she beats her opponents in a series of eliminations, she’ll serve the kingdom for three years and then be granted 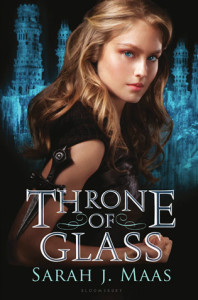 her freedom. Celaena finds her training sessions with the captain of the guard, Westfall, challenging and exhilirating. But she’s bored stiff by court life. Things get a little more interesting when the prince starts to show interest in her… but it’s the gruff Captain Westfall who seems to understand her best. Then one of the other contestants turns up dead… quickly followed by another. Can Celaena figure out who the killer is before she becomes a victim? As the young assassin investigates, her search leads her to discover a greater destiny than she could possibly have imagined.

This book was an all right YA read, but it didn’t live up to its hype or that cool cover—the one with the dangerous looking hunting knives, not the sweet sixteen (which actually does match the tone of the book, to my disappointment). Do me a favor, open a new tab and do a quick image search. Find both copies and have a look. They give totally different impressions of what the book will be like.

I like and wanted a gritty, tough assassin-woman and the first cover promises that. I’m not all that fond of sensitive if skilled, teenage girls slowly falling in love. The second cover could easily relay that…Of the two the second cover is far more appropriate for the book.

And you know what? I wouldn’t have picked it up. Just goes to show the importance of a book’s cover. I COMPLETELY read this book because the version I got my hands on has the first one and the awesome cover pulled me in. I was fooled.

Here’s an example of what I mean. Celaena is said to have been the best and most notorious assassin in all of the kingdom. However, in the course of the book we NEVER (not once!) see her act as an assassin. The closest she comes is using that skill (which we’re repeatedly told she has but almost never see) to save someone’s life. At ~85% there is finally a fight scene, but due to extenuating circumstances, she’s not even in peak condition for it. So, her as an assassin really was an existential thing.

As a result, I found Celaena COMPLETELY unbelievable as an assassin. Because, as I said, we almost never see her act like one (you know, killing anyone or even perpetrating violence of any sort). She was involved in a truly imbecilic competition in which almost all of the challenges were individual events like archery, knife throwing (both at targets) or identifying poisons and the vast majority of them were actually glossed over. So, even though the competition is referred to as “brutal” in the sequel’s blurb, it was actually really tame. She did a lot of reading and flirting and almost no fighting.

But also because she had such a lovely disposition. She had the personality of a nice girl next door most of the time. Yes, she’d let the occasional threat fly and frequently imagined how she might kill someone, but otherwise, she was pleasant as can be. For someone with as much horrible history as she was supposed to have, she was remarkably well balanced.

I think it’s unfair to the reader and untenable for an author to separate a character’s history from her current manifestation. Celaena was supposed to have been trained in assassination since she was 8. She was referred to as the ‘Queen of the Underworld.’ This is a woman who was supposed to have endured, seen, and perpetrated enough heinous acts to terrify a nation. That is the premise of her character. But the nice girl she actually was in the story, the one who valued life so much and felt so bad about killing or slavery, CANNOT SUPPORT THAT PAST. It just can’t. And if the very structure on which the story is built is compromised by such a yawning hole, I guarantee the rest will collapse for me.

I’m not saying the book is bad. In fact, it’s remarkably well written, with snappy dialogue and a rare heroine who, in one sense, chose her own freedom over some mythical idea of true love. I really, really respect that, and was impressed by it. (I imagine it will be undone in future books, but here I got to be pleased.) It just that it sets itself up to be this heavy, ponderous, maybe even violent book when it’s actually pretty light and fluffy. It’s not what I expected to read, based on the cover and blurb, and while a lot of people love it (I didn’t actually hate it) I did feel cheated out of the story I was promised.

Hey, by the way, I notice that until June 18 Goodreads has a contest to win a copy. Go here.