I grabbed a copies of Shadewright and Shadowslave (by Dean McMillin) from the Amazon free list. 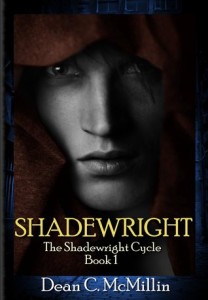 Description from Goodreads:
Born with grey skin the color of lake clay, Phantist is an outcast from birth, shunned by the other children in the Orphan Asylum where he is raised. Then, during a solar eclipse, he witnesses a magnificent performance by Lasander Shadowmaster–a shadewright, sculptor of shadows.

When Phantist discovers that Lasander is a fellow greyskin, he finds his goal: he will become a Shadowmaster himself. His dream is to make an entire city hold its breath as his idol Lasander has done.

This quest leads him to the isolated village of Half Oak, where a strange cult holds sway, worshipping a voice in the earth: the Earth Darkness. The cult’s leader relays a deadly prophecy from his god-master:

“Everything you care about will be destroyed, greyskin. Everything and everyone. And it is all because of you. He wants you to know that. Because of YOU.”

Soon, Phantist is drawn into a web of plots and ambitions. He finds allies: Despanya, a greyskin who has forsaken shadow-sculpting to become a soldier; and Arick, a yellow-skinned master of lightning power whose childish nature belies dangerous abilities.

But the ever-present threat of Earth Darkness pursues them across the countryside. The very ground beneath their feet turns against them …

In the end, Phantist will face a grim choice that will determine the course of his life, and the fate of his world.

Review:
I was basically enjoying this. The writing is perfectly readable, though the editing starts to crumble a little after the halfway mark. (It’s noticeable, but not problematic.) And I’d probably give Arick a star or two all his own. He’s adorable, feels Asperger’s/Autistic-like. I even like that the main character has a tendency to be petty and proud. It’s annoying to read but he has flaws, which is so much better than a perfect Marty Stu.

However, I say, ‘was basically enjoying’ instead of ‘enjoyed’ because the plot barely gets started and then the book ends on a cliffhanger. While I assume the events leading up to Phantist’s quest aren’t random, they kind of feel like they are. He wandered into a random town, is picked out by a random enemy and randomly decides to be the hero. Maybe the next book will pull it more clearly together.

I will be reading the next. The writing is good enough, the characters interesting enough and I’m curious how it will end. But I also have a sneaky suspicious it won’t actually end. We’ll see. 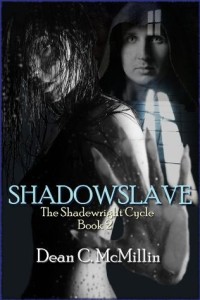 Description from Goodreads:
Phantist, the grey-skinned master of shadows, is summoned to the island of Arliss, a burnt-out ruin of a city where clues to the nature of the enemy beckon.

The house of Lasander– a deceased shadewright of great power, and Phantist’s greatest idol– lies there in a shadow-void, thrust down into shadow to save it from the flames of the earlier fire.

In the realm of the shadow-void, Phantist discover clues to the terrible truths of the conspiracy of the Earth Darkness to destroy his nation. He also attracts the attention of something dangerous. An ancient spirit of pure shadow-essence, feminine in form and highly seductive, who claims to exist to serve his needs, to be his “Shadow Slave.”

But she is vicious and jealous, and soon the lives of the two women Phantist loves are placed in terrible danger …

All the while, in the confines of a vast ruined cemetery on the city outskirts, the cult of the Earth Darkness is nurturing an ill brood. An infant god, nurtured on the essence of dead things and hatred, is about to emerge from his mortuary cradle to spread fear and death across the land … And only a master of shadows can track him down before it’s too late.

Review:
A good continuation to the story; the writing remains strong (though the editing still needs some attention), I still enjoy the characters, there is one heart-rending twist I didn’t see coming, the plot is still slowly developing. Honestly, it’s coming about at an agonisingly slow pace, but it would be unfair to claim I couldn’t see where it’s heading.

This one doesn’t end on a cliffhanger, but it’s very much a middle book (no real beginning or conclusion). All in all, a nice enough read that is compromised by its lack of an ending.