I received a $5 Amazon credit for completing the New Year Kindle Challenge. I posted on Twitter that I was going to use the money to buy books written by my followers. As you can see from the subsequent tweets, that didn’t garner very much attention…any at all really. But I still did as promised and bought two books, Through the Black Mirror, which you can find reviewed here, and The Lowest Realm, by Amy-Alex Campbell. 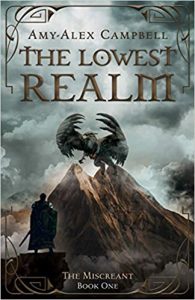 Life on an offshore oil rig is grueling hard work. For Nika the hard work, isolation and discipline is ideal.

On the eve of flying back to the mainland for a two week break, disaster strikes, and Nika is thrown into darkness.

When he awakes in a strange world, with no memory of his past, he finds himself in the presence of monks, who offer to help, on one condition. Nika must deliver an urgent message to the king, and in return, the mysterious monks will help him recall his memories and find a way home.

Instead, Nika is sent on a long journey with his new friend Freyne, and the spoilt Princess Iryna, to fulfill a prophecy that will restore balance to the world.

Nika must adjust to more than just a new world; as his body undergoes a transformation he does not understand, he must also deal with being hunted, forbidden love, mancery, and gods he’s never heard of.

This wasn’t horrible, but it was just exceptionally tedious. It’s almost 400 pages long and very very little ever actually happens. But I can tell you what every building in every town looks like, what color the napkins at the dinners are, about every single bath and change of clothing the characters make as they travel, and travel, and travel. Plus, the author really missed their chance to make a ‘it’s bigger on the inside’ joke about Freyne’s pack. He pulled everything from a spit and small mortar and pestle, to towels and changes of clothing out of that thing.

So little happens, in fact, that the author had to add some casually institutionalized homophobia (with threats of castration and dismemberment) and near-rapes of female characters AS FILLER. Both could be removed from the book without making any changes to the plot. ZERO. It was 100% unneeded, and for me at least, unappreciated.

Additionally, I found many of the characters shallow and poorly drafted. The female characters were especially cliched, EVERY SINGLE ONE OF THEM, even random women met along the way. CLICHED.

Having said all that, Campbell had a sweet story to tell about found family and sacrifice. As I said, not horrid, I’m I’m awful glad to be done with it. 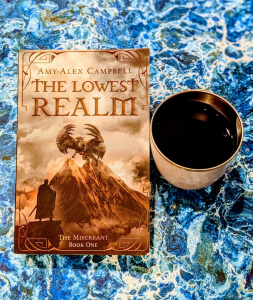