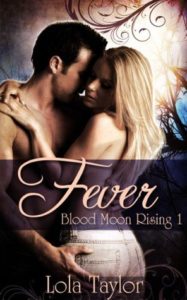 Fever: Blood Moon Rising, by Lola Taylor, is a perma-freebie on Amazon. That’s where I picked my copy up. I read it as the 6th book in my Blood Mood Reading Challenge.

Description from Goodreads:
When the Blood Moon rises, the wolves come out to play… and find their mates.

Danica has about given up on love. In a last-ditch attempt at finding “the one,” she agrees to a blind date through an online dating service. But instead of finding roses and romance, she finds someone intent on killing her. That is, until the mysterious, brooding Gage shows up to save her….

Gage is running out of time to find a mate. If the Blood Moon sets before he can find her, he’ll lose the rank of packmaster – and the peace within the pack – he’s worked so hard to obtain. When he saves a luscious blonde in the parking lot, he has no idea she is his mate – until he Marks her with his touch.

Determined to keep her safe at any cost, Gage whisks Danica away into a hidden world full of lust, unlikely love, and treachery. Someone’s put a hit on his mate, and he’s hell-bent on finding out who, all while the Blood Moon looms closer, threatening to destroy his chances at true love forever. That is, if something – or someone – doesn’t kill the woman he’s falling for first.

Review:
*Sigh* It wasn’t Baaad. It just wasn’t very good either. Nothing and no-one had any depth or development. It was schmaltzy to the nth degree. The same gimmick (like her refusal to believe she wasn’t dreaming or the interrupted sex) was played over and over. Dangers popped up and disappeared without any true tension. In fact, nothing in the whole book had any kind of edge to it. Gage was the most beta alpha I’ve ever read (he did not inspire confidence) and Danica was just annoying and useless. This is basically just a collection of various werewolf tropes strung together with nothing to bolster it up or tie it together. I did like the brother Nik and some of the dialogue is funny, but all in all, not a real winner for me. 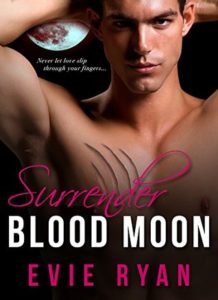 I picked up a copy of Surrender: Blood Moon, by Evie Ryan, at Amazon. It was free at the time and I believe is a perma-freebie. I read it as part of my Blood Moon Reading Challenge.

Description from Goodreads:
Daphne Storm knows how to save lives.

As a dedicated E.R. nurse at Wyoming Mercy Medical, there isn’t much Daphne hasn’t seen: sickness, broken bones, and hunting accidents. But when a little boy is admitted one dark night after barely surviving a vicious animal attack, Daphne’s world is suddenly turned upside down. Whatever did this to him is a monster – a vicious creature threatening not just her town but the very fabric of morality, humanity itself…it is evil.

And as Daphne holds the hand of the boy she and the doctors couldn’t save, she sees a brief mental image of black fur and white fangs. Little does she know, she is playing right into the hands of fate — even more so when she finds herself irresistibly drawn to a man with raven-black hair, one of the strange, rough men who have invited themselves to her town.

The power of the blood moon will turn Damon’s people mad, as the prophecy foretells. During its rise and fall his men must fight the urge to shift, the desire to turn wolf, the need to kill, but when one of the men goes crazy, escapes, and terrorizes Timber Springs, Damon must stop him at all costs.

But the rogue wolf isn’t after the people of Timber Springs. He only wants Daphne. He must be stopped, but no one knows how…

Review:
This is the second book in two days that I wouldn’t have finished if I hadn’t been reading it for a challenge. It was not good.

There was no character development. The whole Blood Moon things was poorly explained. I felt no chemistry between the characters. The heroine was a May Sue that all the men seemed to want. And OMFG the TSTL stunts she pulled darned near drove me to distraction! The editing was a mess. The sex scenes went on forever and weren’t very good.

Every once in a while a phrase would turn just right and dazzle me, but they were few and far between. All-in-all, I have little praise for the book. 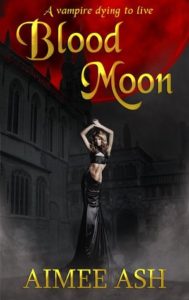 I picked up a copy of Blood Moon, by Aimee Ash, from Amazon. It was free at the time.

Description from Goodreads:
Haidee had a bright future ahead of her, that was until she was viciously attacked in the Never North forest. With a single breath of life left in her lungs she is found by a strikingly gorgeous man. With hope in her heart that this mysterious stranger will save her life, she is dumbfounded when she sees his fangs appear. With Haidee buried alive in the forest she fights for freedom, but when the sun burns her skin she fears that her worst thought is true. She has been turned into a vampire. But soon she will realize that she is no ordinary vampire, she is the chosen one and is sent on a mission by her mistress to kill the leader of the only werewolf pack left in existence. But as she finds herself distracted on her journey the fate of everyone’s lives soon rests in the palm of her hands.

Review:
Wow, that was shockingly bad. The book starts out with this TSTL move on the main character’s part.

Following my usual trail, just as I’d done many times before, my basket gently swayed comfortably on my arm. While I walked, I pictured just how beautiful my sisters would look with mauve bellflower weaved through their braids. Drifting into a daydream, I soon found that I’d lost my bearings and had roamed much further into the forest than I’d intended.

In one short paragraph, the author manages to tell us the girl knows her way, but then gets her lost. What’s more, how stupid does she have to be to wander far past the route she’s supposed to KNOW and end up in a part of the forest called the Never North that she and everyone else is afraid of?

The book had a serious case of, oh-so-special for no apparent reason. Haidee was apparently beautiful, smart, strong, alluring, her blood was sweeter than anyone else, and everyone desires her. She was given power and position for no reason and with no effort. She was too perfect.

The book then just basically turns into a list of fed from/had sex with this person and that person and that one too, interspersed with small snippets of story. She went from virgin to having sex several times a day with no time in between. Maybe this was supposed to be erotica. I say maybe because I’m really not sure. It isn’t, but the character had enough sex for it to be. Until she fell in love with a man she literally hadn’t even had a conversation with.

There were also all sorts of oddities, like her being buried overnight to become a vampire, but never needing to bath afterwards. There also wasn’t a point in which it could have happened and the author simply not mentioned it. Or up until 53% the setting was women in long dresses and cloaks, horses, bows/arrows, candles, and prudish women in teashops. I understandably assumed it was a historical setting. Then, suddenly, Haidee’s talking about her car running our of gas and getting a ride from someone. I honestly believe the author wrote it as a historical and then lost track of the story. That’s how it felt!

The whole thing was full amateurish writing. The narrator’s voice damn near killed me. The writing makes me think the author is very young, though I don’t know if that’s true.

There was an overuse and often inappropriate use of adverbs (other words too, but the adverbs really stood out). Plus, everything seemed to be pulsating, throbbing or pounding. Beyond that, the grammar was just a mess in general. Haidee’s name was used too often in conversations. There was no character development, in fact a large number of them never even speak. They were just there to highlight Haidee’s perfect, desirable self.

I’ll be honest. If I hadn’t been reading this for a challenge, I wouldn’t have finished it. I wouldn’t even have made 20%. It was quite frankly horrible. I’m not even going to pull that punch. That had to be the longest 98 pages of my life. I’d never been so happy to have an ebook end at the 80% mark!