I accepted a review copy of Zeus, by Carly Spade, through Literary Bound Tours. 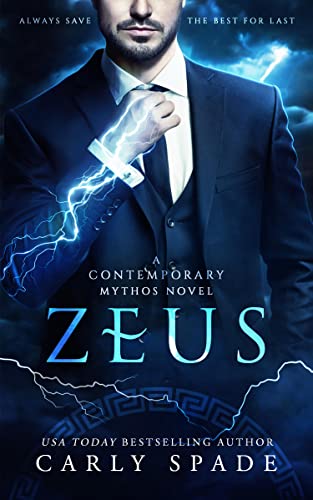 A god-king disguised as a criminal defense lawyer…

Zeus/Zane, King of the Greek gods, holds the world in his palm in both his mortal and godly form… until Hera leaves him, forcing him to uphold Gaea’s clause: There must always be a Queen, or he loses his title and part of his power along with it. Time is short. Too bad the one woman he has his sights on wants nothing to do with him. Or does she?

There’s nothing Keira Bazin dislikes more than defense lawyers. So when she discovers Zane Vronti, one of New York’s finest, has been brought in on her newest murder case, it’s anything but good news. Tensions flare as the two immediately butt heads, but there’s something about Zane she can’t put her finger on. His emotions are the strongest she’s ever felt–borderline overwhelming. Power. Lust. Command. Can she fight her growing attraction for him? Does she want to?

Meh, this was fine, I suppose. The writing/editing worked. There wasn’t really anything wrong with it. But I find that I didn’t love it. I didn’t particularly enjoy the beginning, because Zeus was just so smarmy. I liked the middle well enough, as he dropped some of that act. And then I disliked the end (just about everything after the wedding) because it was just too pat. She suddenly knew how to use her powers with no adjustments. She stepped into her role as goddess and queen (over significantly older, more experienced gods/goddesses) with no notable insecurity of learning curve, etc. And, IDK, I guess it just departed too far from the known Zeus of mythology. All in all, it was fine. I just think maybe I wasn’t quite the right reader for the book. But, hey, if you like the show Lucifer, I bet you’d like this a lot. 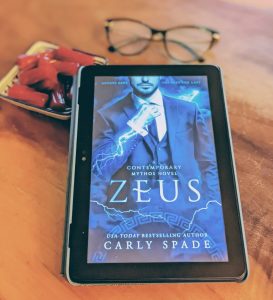 I accepted a review copy of Tides of the Sovereign, by Kate Gateley through Literary Bound Tours. And I normally wouldn’t do this, because I pride myself on making my deadlines. But this book turned out to be twice as long as I expected and I didn’t allocate quite enough time to finish it before my assigned review date. So, I’m throwing up this temporary spotlight and will come back and replace it with a review when I’ve finished the book. 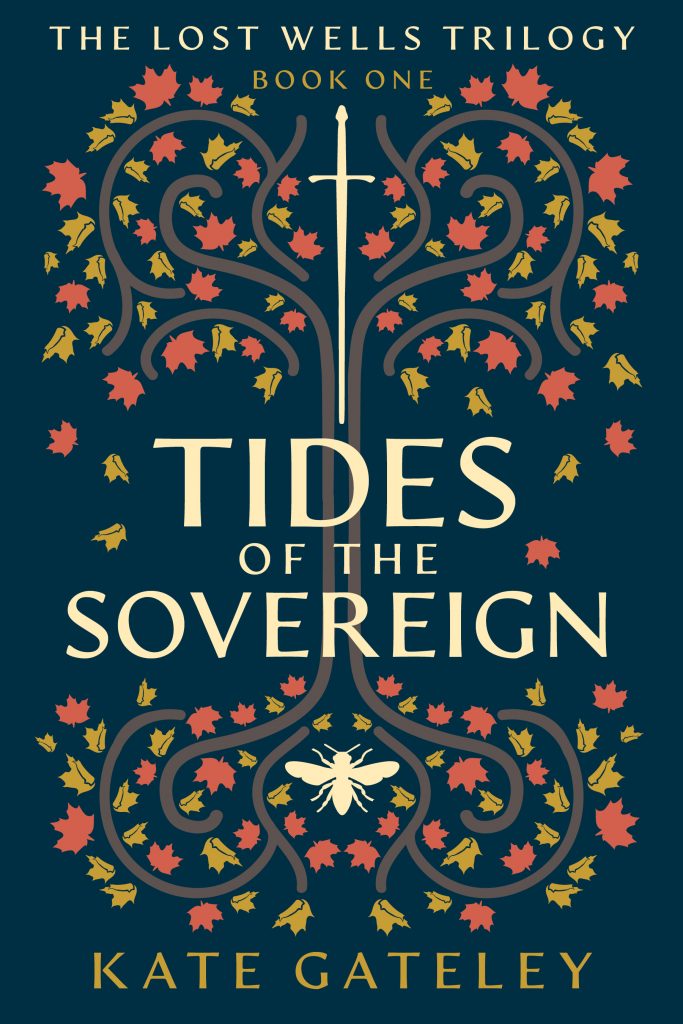 A centuries-old rebirth curse, an otherworldly Celtic prince, and an inescapable prophecy.

Thirty-year-old magic Bearer Julia Harrison had never given the notion of past lives or grand destinies any real credence or thought. She has knowledge of magic, and the power she shares with the women of her bloodline. She’s aware of the difference between Druids and Sorcerers, Wielders and Bearers, and so on, but regardless of all of that… her everyday life has always felt quite normal—distinctly unmagical—and never more so than as of late.

With the recent death of her beloved grandmother, Julia finds herself severed from the only sense of place she’d ever known. Grandma Gertie had all but raised her and was easily the strongest connection she’d had to her own magic, and that of the natural world. Without it, she feels lost. Disconnected. Unable to rely on (or even effectively access) her own limited magics in her current emotional state, Julia’s primary focus turns to placing one foot in front of the other as she resumes a linguistics degree that has taken far longer to earn than it should have.

But when a visiting professor arrives on her Vancouver campus—one who brings with him an odd sense of familiarity that’s almost as compelling as his raw Celtic masculinity, Julia knows that her life’s journey is about to change, heading off on an entirely new path. What she could have never predicted, or even dreamed of, was that somehow, they had walked that path together countless times before… each time towards their own inescapable deaths at the hands of Marcus Cassius Longinus, the indomitable “Child of Rome.” 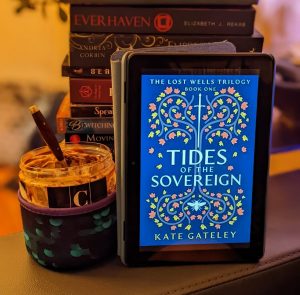 I purchased e-copies of K.F. Breene‘s A Ruin of Roses, A Throne of Ruin and A Kingdom of Ruin. 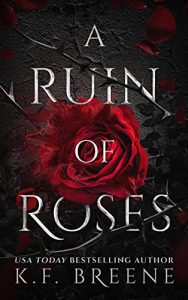 I could save him, but he would ruin me.

The beast.
The creature that stalks the forbidden wood.
The dragon prince.

He has suffered a fate worse than death. We all have. A curse put upon us by the mad king.

We are a kingdom locked in time. Shifters unable to feel our animals. Stuck here by a deal between the late king and a demon who seeks our destruction.

The only one keeping this kingdom alive is Nyfain, the golden prince to a stolen throne. The last dragon shifter.

He’s our hope.
He’s my nightmare.

When he catches me trespassing in the forbidden wood, he doesn’t punish me with death, as he’s entitled.

He takes me, instead. Forces me back to the castle as his prisoner. Seeks to use me.

Apparently, I can save him. I can save the whole forgotten kingdom, locked away by the demon king’s power.

But it would mean taming the monster beneath his skin. It would mean giving myself to him.

It would mean my ruin.

I enjoyed this quite a lot, though the second half significantly more than the first. I thought a lot of the humor in the first half—before the main characters had much of a relationship—fell flat and the whole thing felt a little silly. However, once Finely and Nyfain met things took a turn for the better. Her humor worked a lot better when it had a foil, someone to bounce off and return.

The steam factor isn’t all that high in this first book, though it’s my understanding that it picks up in book two. There is quite a lot of sexual tension and ‘almosts’ though. So, if that’s your cupcake, you’ll be happy with this book.

What I like most though is the way Breene is playing with gender tropes. Nyfain is physically bigger and stronger, true, but Finley is the hero of this book, hands down. I mean the last 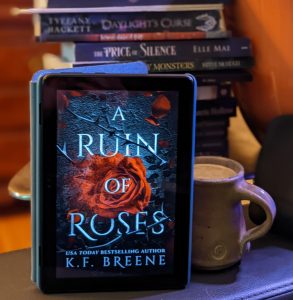 sentences kind of make the point excellently: “If he wanted to play hero, I would. And I’d make him my damsel.”

And Breene manages to make Finley the hero(ine) without emasculating Nyfain or stripping Finley of any feminine traits. She’s butch, yes, but she’s not the dreaded ‘man with tits’ we see some authors sculpt when the only way they can think to make a female character strong is to write her as a man, even as they describe them as a woman. No, Finley is going to save the day and she is going to do it as a woman. The question is just what the journey there will look like.

All in all, I’m looking forward to book two. 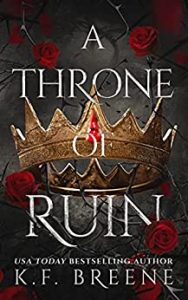 The only thing protecting me from the demons…is the beast.

Nyfain, the golden dragon prince, tried to set me free. But there is no freedom in this kingdom. Not for anyone.

The demons have sought me out. They want to trap me. To use me against Nyfain.

It’s only a matter of time before they call in the demon king.

Nyfain thinks I should save myself. That I should barter with the demon king to escape this place.

But can I give myself to the creature responsible for torturing the people I love?

In order to save them, though, I might not have a choice.

I liked this even more than the first one. Finely continues to be a super badass heroine who is clearly going to save the day and I’m completely here for it. Nyfain showing his softer side and being ready and willing to submit to and support her authority was endearing. And the two of them exploring fantasy and kink together was great. For me it wasn’t even about the sex—though there is plenty of it—but seeing them open up and talk about things that, outside of their singular situation, would be awkward and embarrassing was a a lot of fun. 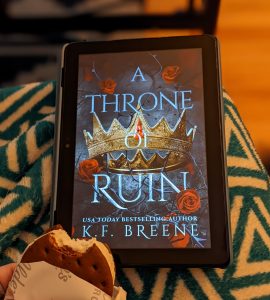 But all in all, I’m still all in to see how the series continues. 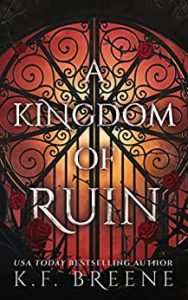 Never sell your soul to the Demon King.

In an effort to save all that I love, I have to finish the job Nyfain started… and ruin myself.

I’ve made a trade with the most cunning creature alive.

I just have to get out of here and back to my golden dragon. Preferably alive.

While I’m still enjoying the characters and the series. This particular book wasn’t a comparative winner for me. It felt very much like a middle book, which (in a sense) it is. What’s more, what I’m enjoying about this series is Finely and Nyfain together. And they are apart for most of this book. In fact, Nyfain is barely in it at all.

In a way, this is still Breene playing with expected gender roles. Finely goes off to save the day and Nyfain is left waiting and worrying at home. I recognize and appreciate the fact. But I still 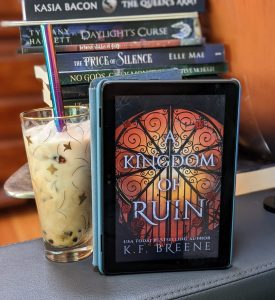 missed their banter and the progression of their relationship.

What I got instead was quite a lot of legitimate humor in the book. Especially in the form of Hadriel and Leala, and the new dragons (Vemar was my favorite.) I laughed a lot. And I enjoyed the heck out of that.

I’ve pre-ordered book 4 and I’m hoping it’s the last of the series. Not because I’m not still liking it, but because I fear it will jump the shark before too long if it doesn’t wrap up.