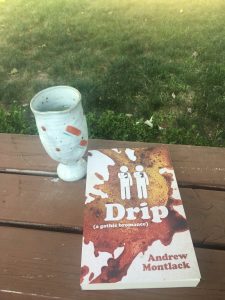 I received a copy of Drip: A Gothic Bromance from the author, Andrew Montlack, for review.

Description from Goodreads:
J.D. and George: thick as thieves since the fourth grade. J.D., the troublemaker, the stud: the alpha. George, the sidekick, the misfit: the loser. Upon graduating college, J.D. has convinced the only job creator in rusty Middlestop to hire them. BrewCorp, the hot new coffee and retail chain, is offering a vice presidency to the employee with the boldest plan for growth, and J.D. is determined to be the guy. When not sleeping with co-workers, he hatches his pitch for a one-of-a kind data pipeline. He is unbeatable–until George grabs the promotion. Now J.D. wants answers. His quest to find them—and to deal with the monstrous truth—is the subject of indie filmmaker Andrew Montlack’s wry debut novel, which features the same biting satire that made his mockumentary, The Devil’s Filmmaker, a cult classic.

Review:
I started this book with a bit of hesitancy. No, that’s not right. The start of this book made me hesitant; that is more accurate. There is a certain subset of predominantly male, bizarro/horror authors that write books with a certain pompous, presumptuous tone that drives me up the wall. They always feel as if the author is sneering at the reader, like, “You chump, you’re reading MY work so piss off!” They’re basically what happens when trolls write, whether they’re good at it or not is irrelevant. It’s about tone, not talent.

The first chapter or two of Drip, the way certain scenes and characters were described and explained, even if the reader should reasonably be expected to know, hinted that Montlack might be such an author. I groaned and wondered at the number of Pantera and Metallica shirts he might owns. (Yes, totally spurious.) But I’ll happily report that Montlack pulled it together and an interesting and non-trollish book developed. I even liked it.

It does some interesting things with its plotting. The most notable is the unexpected hero. It’s not who you expect, who experience tells you should rise above and save the day. There is a certain narrative reader can generally expect, we’re fed it so often and unrelentingly. The meek will inherit the earth. The downtrodden will get their comeuppance. The arrogant youth, who has always gotten their own way, will one day face their own fallibility, while the person who followed the rules is shown to have walked the right path and will receive their rewards. That is not the story you receive here. One character has always had the best—he would say worked for the best—even if he had to step on others to get it, and the other has always been pathologically hesitant and unlucky, polite to a fault. Conventional plotting would balance those scales. Not Montlack.

This makes for a really interesting turn of events, a fun story. But I have to admit it’s also uncomfortable. It feels inherently unfair. In fact, while I loved the epilogue, I never did reconcile myself to the end. One character really did get a bum deal.

But the genius of it is the way it leaves you to ponder if Mr. Charisma is a bad person or not. Certainly, by the end he’s grown exponentially and can be said to be a good man. But what about previous to that? He’d spent his whole life being arrogant, self centered and rude. He has one tragedy that gives him a bit of depth, but is it enough? He did take care of his best friend. But does that count if it’s only within his own limited view of desirability. How much of it is out of any sense of loyalty and how much is just because he benefits from it? You’re never really sure and it keeps the character interesting.

Similarly, though you see much less of Mr. Beta’s personality, you see how he fell into the circumstances he does. Some of the most enlightening passages of the book come out of his mouth.

I thought the corporate vampires were a fun touch, though they did become caricatures after a while. Perhaps it’s the Gothic influence, but as I often do with vampire novels, I was left wondering why they only ever seem to hunt women. A few men got incidentally noshed on or died fighting, but every vampire victim to have a detailed death was a woman.

The writing itself is worth a read. Montlack knows how to turn a phrase and it’s pretty well edited. So, the actual reading experience is a pleasant one.

All in all, I really enjoyed it. I think I, personally, would have preferred it moved farther into either the serious or comedic category. As it is, it straddles the two in a way I found less that ideal. It’s humor kept me from taking it seriously and it’s serious bits kept me from just letting go and laughing at it. But that’s basically a personal preference sort of comment. 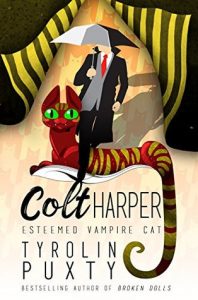 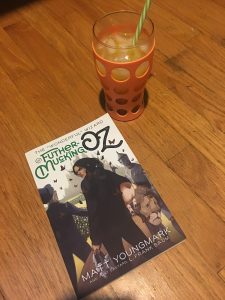 Through Goodreads, I won a copy of Matt Youngmark’s The “Wonderful” Wizard of Futhermucking Oz.

Description:
Arabella Grimsbro is a 15-year-old girl with a mouth like a dock worker and an attitude to match. When she walks into Voyages Through Literature—a cheesy mall store promising virtual reality tours of public domain classics—the last thing she expects is to be whisked away to an actual, magical world.

To make things worse, this Oz is very different from the one she saw in a movie when she was little. Ferocious beasts with grizzly bear bodies and tiger heads? A town of creepy, porcelain dolls? The Tin Woodsman lying broken and battered at the bottom of a ditch? Arabella will need more than surliness and silver slippers to find the answers at the end of this rainbow—or even just survive the trip.

A quick diversion:
Before I get to the review, can I just show you the Editor’s Note, which pretty much gives me life? 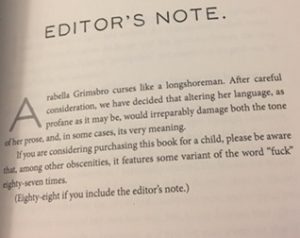 Review:
First off, that cover is just awesome pretty. Half Peruvian, angry ‘Dorothy’ is fearsome and I love her.

Secondly, I appreciate the diversity in the few non-Oz characters available to the author. (The Oz characters are, you know, a scarecrow, a tin man, a lion, a dog, some witches, flying monkeys, munchkins, etc. So, you know, Youngmark was maybe a little tied down with them.)

Thirdly, this book is funny. Utterly ridiculous, of course, but purposefully so. It’s completely hammed up. I had a ball with it.

Having said all that, I am glad it isn’t any longer than it is. Because for all its humor, it is still the story of Dorothy in Oz, a completely known and predictable plot. It is at the end of the day a one trick pony and if it had been much longer the schtick wouldn’t have been enough to carry it and I’d have lost interest. As it is, it ended in time and I enjoyed it quite a lot.

What I’m drinking: Look I figured this was the sort of book that would pair well with alcohol. So, I’m drinking Seagrum’s gin and orange-mango juice. Yes, I do realize that is an odd mix, but it came down to what was available in the house and it was gin and tropical juice or that stuff on the right. Since I did actually want to remember reading the book, the Chinese fire water wasn’t really an option. As it is, you might notice almost every picture is a little off kilter. Sorry ’bout that.