I accepted a review copy of A Flight in the Heavens (The Theurgy of the Gods, #1) from the author, Gabrielle Gagne-Cyr. (Though I noticed it was free on Amazon at the time of posting.) It was also promoed on Sadie’s Spotlight. 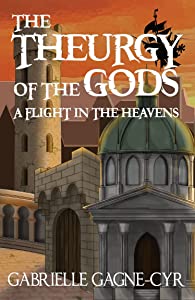 “I see you my little moppets.”

The king is dead, long live his murderer. After fifteen years of passive torment, Farrah and her implacable group of renegades endeavour to alter their fates by attempting to assassinate the man who stole everything from them, Daemon Daromas. Alas, he who wields the theurgy of the gods has no rivals in the lands of Iscar but those foolish enough to challenge their wrath.

When confronted by this ancient and destructive force, the renegades have no choice but to flee the capital and embark on the airship of Iscar’s most notorious sky corsair Captain Feras Sadahl, daughter of the late pirate sovereign. Their meeting with the corsair, however, might not have been as welcome as they would have hoped.

As Farrah and her allies set out on a journey to find the means to challenge their oppressor, they soon discover that the price of power is steep and the road to get one’s hands on it, perilous.

It took me forever and a day to finish this book. Granted, it’s a long book. But I’m a really fast, obsessive reader and generally prefer to read one book at a time. But if I’m not particularly grabbed by one, I sometimes let myself take a break and read something else between chapters. How many books I splice in while reading one can be taken as a signifier of how much I’m enjoying a book (or not). In the case of A Flight in the Heavens I read something like 16! Well, I listened to most of them (but that’s mostly because it’s the format that was available to me). There are a myriad of reason, none of which are that the book is horrible.

But before I get into the criticisms, let me drop some positives. A Flight in the Heavens is epic in scope. Both because it’s 509 pages long and because at the end of 509 pages, the over-arching plot has barely started (though it comes to a natural stopping point). It’s a big world, with some interesting characters. I truly liked Faras and Farrah and wanted them to accomplish their goal. And every once in a while Gagne-Cyr would give us some fabulously vivid imagery, like, “Essan and Thorick had been going at each other’s throats in a peculiar duel resembling the portrait of a lethal insect attempting to sting a bear.” But none of that was enough to keep me interested.

The problem is that the book is about 200 pages longer than it needs to be. It too wordy. (See the insect and bear line above. I love the analogy, but the sentence if wordier than it needs to be.) It’s too repetitive (we’re told the same information multiple times), too dependent on exposition, and too FULL of awkward word usages. For me, this last was the biggest challenge. I almost always knew what Gagne-Cyr meant, but the language is jarringly inaccurate.

Here are a few of the last ones I remember, “…trying not to make eye contact with the soaring utensil…” How do you make eye contact with a spoon that has no eyes? Or, “he snarled in a delighted tone of voice…” I mean, I suppose it’s possible, but a snarl usually accompanies anger or hatred. “…shattered the skin of his midsection.” The verb shatter infers something brittle or crystalline breaking, skin is supple. I can’t imagine it shattering. Again, I know what all of these sentences meant and they might not even be technically wrong, but every single one pulled me from the narrative. And there was one on most pages, which meant I never could just sink into the story and coast along. I was always restarting and loosing gumption.

Though I think an additional editor could have helped tighten the narrative and help Gagne-Cyr with the awkward word choices, I have to admit the book seems really clean in terms of mechanical edits. I don’t really remember any typo or missing word sort of errors. So, in the end, I think this is just going to be a matter of taste. Either you like Gagne-Cyr’s creative use of language or it distracts you from the reading (as it did me). Only one way to find out, really, give it a try.