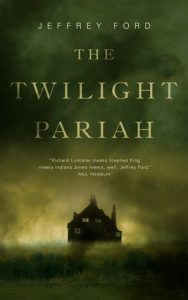 I borrowed a copy of Jeffrey Ford‘s The Twilight Pariah

Description from Goodreads:
All Maggie, Russell, and Henry wanted out of their last college vacation was to get drunk and play archaeologist in an old house in the woods outside of town. When they excavate the mansion’s outhouse they find way more than they bargained for: a sealed bottle filled with a red liquid, along with the bizarre skeleton of a horned child

Disturbing the skeleton throws each of their lives into a living hell. They feel followed wherever they go, their homes are ransacked by unknown intruders, and people they care about are brutally, horribly dismembered. The three friends awakened something, a creature that will stop at nothing to retrieve its child.

Review:
Not bad, but I wouldn’t say it covers any new ground or anything. I appreciated that, even with the narrator being male, the leader of the gang is obviously the women. Similarly, the inclusion of an incidentally gay man (and his boyfriend) with no need to include a homophobic encounter was nice. The writing was easily readable and the editing was good. But I finished the story with a shrug, rather than a shiver. 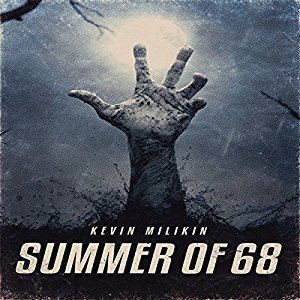 I won an audio copy of Summer of 68, by Kevin Milikin

Description from Goodreads:
When the world ended some people believed that it was the fault of a failed space probe, others–an act of vengeance from an angry God. No one knew the reasons why but across the globe, millions of the recently deceased rose from the dead, possessed with one singular goal: To eat the flesh of the living.

Over the course of a few short hours the world was lost.

In the Northern California town of Red Bluff, a Sheriff struggles to grasp this strange and hellish turn of events that have ravaged his small town and maintain order as it all falls apart.

Two brothers struggle to make sense of this new world, traveling through the putrid remains of their beloved town–torn between survival and the love their mother. The world has ended and soon they will learn that all they need to survive is each other.

Review:
With a few exceptions the writing here is smooth and pleasantly atmospheric. However, there is nothing new offered in this zombie yarn. It is nothing more than the struggle for survival of a few random people in the face of a mysterious zombie plague. No explanation is given, no certain ending provided, no real reason even for why the character we follow are the characters we follow. I won’t go as far as to claim the book has no plot, but it does seem distinctly without purpose. Why are we following the sheriff and two young boys as they explore the landscape? Why not the baker or the barber? What is the goal?

The book is heavy on the zombie gore. So, if that’s the sort of thing you’re interested in, this will be a hit. If you like a little more storyline with that gore, maybe not.

For the most part Rick Gregory did a fine job with the narration. He had an odd habit of breaking sentences in unexpected places and pronounced a couple words in ways I hadn’t expected. But mostly it was easy to listen to. 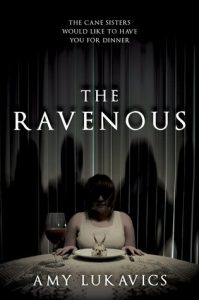 I won a copy of Amy Lukavics‘ The Ravenous through Goodreads.

Description:
From the outside, the Cane family looks like they have it all. A successful military father, a loving mother and five beautiful teenage daughters. But on the inside, life isn’t quite so idyllic: the Cane sisters can barely stand each other, their father is always away, and their neglectful mother struggles with addiction and depression.

When their youngest and most beloved sister, Rose, dies in a tragic accident, Mona Cane and her sisters are devastated. And when she is brought back from the dead, they are relieved. But soon they discover that Rose must eat human flesh to survive, and when their mother abandons them, the sisters will find out just how far they’ll go to keep their family together.

Review:
This wasn’t bad, quite creepy actually, and I appreciated the way Lukavics’ teens weren’t all perfect, stereotypical angels. We had alcoholism and mild drug use and a little sexual diversity. The writing is even pretty good. But it took me forever and a day to finish it. I just never was really invested in it. So, I would read a couple chapters, get bored, pick something else up and then, when I finished that, pick this up for a couple more chapters, before wandering off again. So, not bad, but also not a big winner for me.