I borrowed an audio copy of Janet Evanovich‘s Wicked Appetite from the library.

For centuries, treasure hunters have been eager to possess the stones, undeterred by their corrupting nature. The list is long — Genghis Khan, Alexander the Great, Napoleon, to name a few. Now the Stones have found their way to Salem, Massachusetts, and so has Gerwulf Grimoire, adding himself to this rogues’ gallery of power seekers. He’s an uncommonly dangerous man, with a hunger for the forbidden, and a set of abilities that are way beyond ordinary. Abilities that he feels entitle him to possess anything he might desire.

That would include Elizabeth Tucker, the woman he needs to find the Stones. She’s freshly transplanted from New York City to Boston’s North Shore. With a new job as pastry chef at Dazzle’s bakery and an old house inherited from her Aunt Ophelia, her life is pretty much on track …until it’s suddenly derailed by a guy named Diesel, a rude monkey, and a ninja cat.

Lizzy can handle the monkey and the cat. She’s not sure about Diesel. He’s offering up his own set of unusual talents, promising to protect her from Grimoire. The kind of protection that Lizzy suspects might involve guarding her body day and night.

I’ve wanted to try a Janet Evanovich book for a while. Everyone seemed to love them. But I was never certain where to start; there are so many of them. So, when I came across Wicked Appetite, clearly labeled book one in a series I jumped at it. (For the record, I think Diesel is a character from another of Evanovich’s series. But the book certainly stood alone.) After all the anticipation I was severely let down. I found the whole thing silly beyond belief. And not even endearingly silly, just stupid silly. I was irritated by all the onomatopoeia, the dialogue was ridiculous, the plot paper thin, and the characters shallow. I made it all these years without ever reading one of Evanovich’s books. It looks like I’ll go several more without them. I have no desire to read another one. Lorelei King did a fine job with the narration. 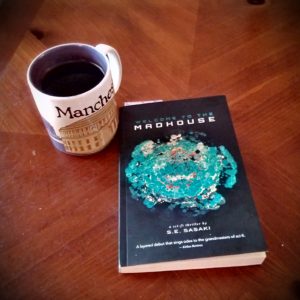 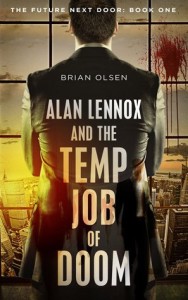 I snagged a copy of Alan Lennox and the Temp Job of Doom, by Brian Olsen, from Amazon. At the time of posting is was free.

Description from Goodreads:
Alan Lennox has been assigned yet another soul-crushing temp job, keeping him from his first loves – drinking, playing video games, and looking for a boyfriend. But Alan’s new job proves to be anything but boring when his co-workers start turning up dead. The mysterious megacorporation Amalgamated Synergy has taken a deadly interest in Alan and his three roommates, and the hapless quartet are woefully unequipped to deal with the psychotic secretaries, murderous middle managers, and villainous vice-presidents hunting them down.

Their investigation leads them deep into Amalgamated Synergy’s headquarters, but can Alan and his friends stay alive long enough to discover who – or what – waits for them on the top floor?

Review:
This is one of those books that is frustrating because it’s almost something special (and probably is for some people, just not for me). I liked the characters, though they were a little stereotypical. I liked the plot, even though it was on the slow side. It was funny, written well enough and possibly an allegory, but none of that really makes up for the fact that I never could buy the ending. The how of what happens is conveniently skipped over and it all felt rather anticlimactic.