Last year, I won a copy of Blood and Ember (book 3 of the Stormbringer series). But I put off reading it because I didn’t have books 1 and 2. Well, lately, I’ve been making a concerted effort to read books from my physical book shelves. I borrowed The Stormbringer (#1) and The Night Born (#2) from Hoopla so that I could read Blood and Ember (#3). 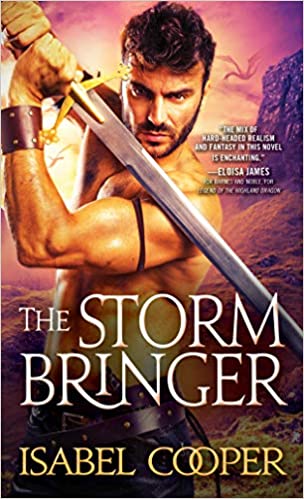 Raised to be weapons against the darkness, Sentinels spend their lives fighting the monsters that prey upon humanity. Their hands will shape the world, and their swords will seal its fate.

A warrior lost to time…

Pursuing her latest quarry deep into the wilderness, Sentinel Darya finds herself in an ancient city that should no longer exist. There she comes upon a handsome warrior in ancient clothing, held in a deathlike sleep—Amris, hero of the last great battle against the Traitor God. His discovery, and the weakening wards about the city, can only mean one thing: the Traitor is gathering his armies again, and the storms are returning.

Amris has been trapped in dreamless sleep since the final battle raged centuries ago. Now he is awake…and so, it seems, is humanity’s greatest threat. Determined to save the world from being swallowed by the oncoming storm, Amris and the fiercely beautiful Darya must learn to trust each other—and the powerful bond that’s formed between them—as they fight their way through a land swarming with monsters in a last desperate bid to get word back to their allies before it’s too late…

Having read this, I can now say that I enjoyed it a lot more than I expected. I thought both Amris and Darya were lovely characters. They were just so unfailingly kind to one another and those around them—good people. Plus, they’re both well into adulthood. I also very much appreciated being given a bisexual hero (without it being any drama) and several LGBTQ side characters. Similarly, Darya and Amris had different skill-sets, but both were allowed to excel together and apart. (And they do fight apart, even after getting together.) So often, us readers are given a ‘badass heroine’ who goes limp in the presence of the hero. Cooper didn’t do that to us. Darya stays just as competent and dangerous after meeting Amris as she was before and I loved that.

I did feel a bit thrown into the story. The book starts at the re-ignition of a magical war and there is a lot of history to absorb quickly. I never felt like I got a real feel for the villain. For that matter, I don’t really feel like I got to know Darya and Amris particularly deeply either. I liked them, but they are on the go for the entirety of the book and I didn’t feel like there was ever a chance to pause, breathe, and get to know them outside of the circumstances of the story.

All in all, however, I can’t wait to jump into book two. Though I do want to make a quick point about the cover. One presumes that is Amris, the male lead. He spends the entire book in plate armor. He briefly takes it off to bathe, sleep, and for the single (very mild) sex scene. But he is notably in armor the whole book. So, why are we given a shirtless cover? It’s not that I dislike the cover, or that I’m a prude about skin. But I do feel like it misrepresents the sort of story one will find under that cover. Just, sayin’. 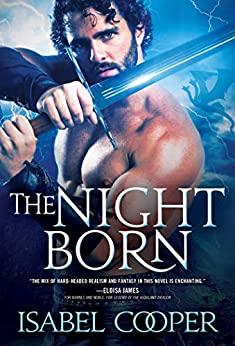 Raised from childhood to be weapons, Sentinels spend their lives fighting the monsters that prey upon humanity. Their hands will shape the world, and their swords will seal its fate.

As war looms, Sentinel Branwyn seeks military aid from the High Council, attracting interest from its youngest member, Zelen Varengir. He’s intrigued by Branwyn but can’t risk helping her cause. Instead, he must learn all he can about the intriguing newcomer—especially who’s behind framing her for the murder of the High Lord and threatening to tear apart the world as they know it…

Oh man, what is with these covers?! Yes, I do realize that I said much the same thing about book one and it is the least important aspect of a book for a book review. But honestly, Zelen is a healer and a diplomat. He does know how to use a sword, but he is 100% not a warrior. Plus, he’s tall and slim (and not prone to walking around shirtless). So, what is that cover! Who is it supposed to be? Because it is NO ONE in the book. And the fact that I’m starting my review with it tells you how strongly the disconnect between it and the actual story truly is! It not only is inaccurate, it gives you the impression the book is in a totally different sub-genre than it is (erotic romance instead of fairly low-spice romance).

Now, about the actual story. I didn’t like it quite as much as book one (The Stormbringer), but I also feel like I got the chance to know these characters better than Darya and Amris, which I appreciated. Much like book one, Zelen and Branwyn are lovely 30 plus year-old people who are honest and kind to those around them (including each-other). In Branwyn’s case, she’s tied to a god who values honesty, which just makes her disinclined to be anything but straight forward. I can’t stress how lovely it is to read a romance that doesn’t bother with drama produced by avoidable dishonesties. Both characters are clear with themselves and each-other about they want.

The writing is clean and easy to read. There’s a notable amount do diversity too. Off the top of my head, I remember a counselor with a sex sex partner, a healer in a wheelchair, and peoples of various ages, sexes, and appearances. All of whom simply existed, without there needing to be a ‘reason.’

All in all, I’m still enjoying this series and look forward to reading book three, Blood and Ember. 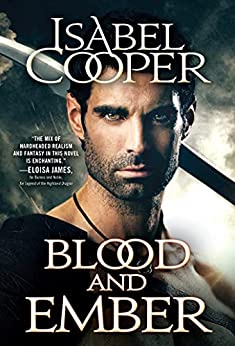 A century ago, the Traitor God’s fury left the world broken by violent storms and twisted monsters born of darkness and death. Now those storms are sweeping across the continent again and it will take everything the armies of man can muster to survive. As a sworn knight, Olvir is prepared to do his part—even if that means journeying deep into the magic-tainted Battlefield to face the enemy alone.

Sentinel Vivian Bathari has lost too much to allow her closest friend to make such a sacrifice on his own. Besides, there are whispers that Olvir’s strange new powers are somehow connected to the Traitor God, and she’d rather be by his side should the worst occur. But as they travel deep into the heart of danger, their growing attraction burns into mutual desire, and the true depth of Olvir’s connection to the evil haunting their world is made clear. In the end, Vivian will have to decide what she’s willing to sacrifice to save their world…and the man she loves.

I thought this a satisfying conclusion to the trilogy. It did drag a bit. The book is largely two character walking from one place to another, talking, and encountering the occasional challenge. But I liked both of the characters a lot. And I very much appreciated what Cooper let them be. Of the two, Olvir is the younger by close to 10 years and Vivian is 40+. That’s not a pairing you see often (except in ‘sexy cougar seduces younger man’ scenarios, which this isn’t). And both are just unfailingly kind to one another in very difficult circumstances. I feel like Cooper went out of her way to subvert a lot of tropes and that didn’t go unnoticed or encouraged on my part.

The book reminded me a lot of T. Kingfisher‘s The Saint Of Steel series, with the tragically noble knight and the practical older romantic partner. Luckily, I really enjoyed those book (at least what I’ve read of the series, I’ve not finished it). I recommend both it and this one though. 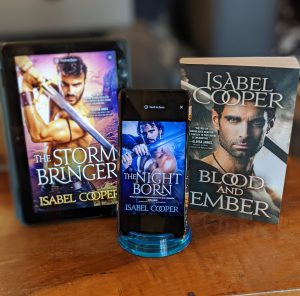 The Reading Cafe: The Stormbringer