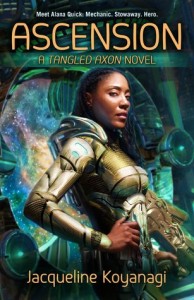 I got a copy of Acension (by Jacqueline Koyanagi) from my local library.

Description from Goodreads:
Alana Quick is the best damned sky surgeon in Heliodor City, but repairing starship engines barely pays the bills. When the desperate crew of a cargo vessel stops by her shipyard looking for her spiritually advanced sister Nova, Alana stows away. Maybe her boldness will land her a long-term gig on the crew. But the Tangled Axon proves to be more than star-watching and plasma coils. The chief engineer thinks he’s a wolf. The pilot fades in and out of existence. The captain is all blond hair, boots, and ego . . . and Alana can’t keep her eyes off her. But there’s little time for romance: Nova’s in danger and someone will do anything–even destroying planets–to get their hands on her.

Review:
Oh man, this book disappointed me so hard. When I first heard of it, I thought, “Lesbian POC as a main character? Hell yeah.” Then someone referred to it as a lesbian Firefly and I ordered it the same day. Man, what a let down.

★Let’s start with the writing, it’s obscured, full of phrases like this: “His voice eventually tore in half, and he was quiet.” What the hell does that mean? It meanders. It repeats itself. It’s too flowery to be functional.

★Then there is the sex, which relates to the obscure writing. It was (I think purposefully) vague about what went where, such that phrases like “she slipped into her” felt very P-in-V. Surely, in that example it was meant to be a finger or some such, but lacking that information it resulted in the most hetero-feeling lesbian sex scene I’ve ever read.

★Then there is the romantic angst. My god, it drug out FOREVER because the MC would neither ask for clarification nor allow anyone to explain it to her. It was drawn out far beyond what could feel natural.

★Then there is the main character. I simply didn’t like her. She was reckless and a little TSTL. She created problems everywhere she went doing stupid things. And no one ever called her on it.

★There is almost no world building. Info bombs are dropped and never explained. For example, ships are referred to as alive but it’s never explained what that means or in what manner (and that’s far before the final reveal). There is no known political system. The science is basically hand waving.

★Outside the main character, there is no character development (and only a little for the MC). You don’t get to know anyone in any depth.

★The finale came out of left field and didn’t feel tied to the rest of the plot at all. And true, even considering the book basically just wonders around almost aimlessly in general.

★But worst of all, the book was bloody boring. There is so much internal angst and philosophical nonsense that my attention started to drift. This is the only book I have ever read that managed to make the genocidal destruction of an entire planet and research station, including people important to the characters, dull. Honestly, there was nothing.

So basically this book was a fail for me, made even more strongly so by my having such high hopes for it, going in.