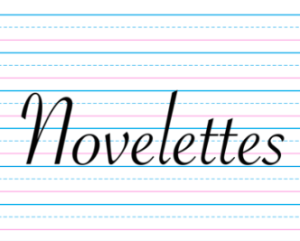 I had planned to do this all in one post, but I obviously underestimated how many shorts I have. Do those things breed in the cloud, you think? Anyhow, I basically just started with the shortest and have been reading them in order of length, skipping anything that’s part of a series I have the rest of. You can go here to see those that were between 15 and 39 pages in length. I’m picking up 40-50 pages here, which technically puts us in novelette territory. I suspect I’ll need a second or third post to get them all in, so I’m breaking them up by 10s. (These are mere approximations, of course.)

As a reminder of why I’m doing this: it’s difficult to type with a broken arm, so I’m concentrating on things I can write short reviews of.

The Nog Sisters, by Ian Fraser: Much better than I expected. Complete stand alone story that’s a bit like Peter Pan in that children could read it and not grasp some of the adult inferences (which were my favorite parts). I wouldn’t call it a children’s story though. Good for making readers think about the importance of perspective.

A Calling for Pleasure (Damned If You Do), by J.L. Merrow: Really cute and hot. Extra points for Rael’s tail and being a freebie, but minus for the cliched ‘scorned woman turns murderous’ schtick.

The Witch Who Made Adjustments, by Vera Nazarian: I enjoyed it quite a bit. Tommy was delightful and I liked the witch’s calm demeanor in the face of the town people’s anger.

The High King’s Golden Tongue, by Megan Derr: Cute and well-written, as has been everything I’ve read by Derr. This one was a bit sappy for me and I’d have liked a bit more development in the relationship.

Angel All Year, by Sally Clements: Meh, rushed, overly romantic, uses pointless misunderstanding as the climactic event and has odd word usage. Didn’t light my fire, not even a little bit.

Daywalker: The Beginning, by Tessa Dawn: Meh, ok, I guess, if you’re into snarky heroines. I thought there was too much unnecessary background that was obviously meant for the future series and not enough meat to the story itself and I dislike sudden understanding and success with a power a character never knew they had until that moment. Not much point to reading it unless you plan on reading the rest of the series, which isn’t out. So…

A Very Sacrati Christmas… or Late Wintermas, by Kate Sherwood: Super cute. I enjoyed it every bit as much as the book (Sacrati).

The Trouble With Trouble, by Kathleen Lee: It was ok, cute, but a little too heavy on the ‘been hurt before so can’t get close to another human.’ I thought dude who wouldn’t take no for an answer was a little creepy and I thought the ‘jump to worst conclusion, react without verification’ schtick was cliched. It also ended with the pre-2015 m/m romance version of a wedding proposal, which was too pat for a short story.

The Whaler, by Steve Roach: Kept me interested and is a complete, stand-alone tale.

Rorie, by L.L. Loremir: Can’t say this one was a winner. Rushed, far too wordy, too much sex, and repetitive. Rorie’s name isn’t even introduced until 43% and even then authors insistence on calling him ‘the royal,’ ‘the nymphling,’ ‘the half-nymph,’ ‘the young man,’ etc was infuriating. ‘The royal’ is the worst though. The story is only 43  pages long and the word royal is used 116 times!

Mountain, by Liu Cixin: Not my favorite Liu Cixin so far. Creative & science heavy, as always, but felt very much like it focused on the unimportant in the face of other, wider-scale, more important things. It did eventually culminate in an interesting epiphany for the MC though.

Something Real, by Julia Alaric: A little rushed toward the end, but cute. Two awkward geek boys (one maybe a little asperger’sy) meet and find love on an international space station.

The Last Rebellion, by Lisa Henry: I am super conflicted about this one. Marvelously written, and I’m told true to the prompt, but so much rape and torture that I just felt bad reading it. And outside of Stockholm Syndrome, I just don’t get the men’s eventual actions. But the magic of FICTION is that sometimes the last chapters can absolve the first and the book, as a whole, can simultaneously be horrifying and gratifying. By the end I was enjoying it.

Vampire Slave, by Yamila Abraham: I don’t know why I keep doing this to myself. I’ve read the beginning of several of Abraham’s stories now and I have the exact same response to all of them. I always get sucked in by the manga-like covers (this, like the others, is not manga or yaoi BTW) and enjoy the writing and characters but HATE the serialization. This is not a complete anything, not a complete story, not a complete chapter. It’s barely a start and I’m not about to pay, what ends up an exorbitant amount, to finish it. Even having said all that, this is not my favorite of their works.

Chances Are, by Lee Brazil: I quite enjoyed it and would be interested in continuing the series, though there seemed to be a lot of missing back story. I don’t really understand the whole Pulp Fiction, four overlapping series thing but I simultaneously liked seeing the characters from Wicked Solutions and Triple Threat here and am annoyed at the chaotic reading order it creates. But I liked the story.

Wicked Solutions, by Havan Fellows: I quite enjoyed it and would be interested in continuing the series, though there seemed to be a lot of missing back story. I don’t really understand the whole Pulp Fiction, four overlapping series thing but I simultaneously liked seeing the characters from Chances Are and Triple Threat here and am annoyed at the chaotic reading order it creates. But I liked the story.

Triple Threat, by Laura Harner: I quite enjoyed it and would be interested in continuing the series, though there seemed to be a lot of missing back story. I don’t really understand the whole Pulp Fiction, four* overlapping series thing but I simultaneously liked seeing the characters from Chances Are and Wicked Solutions and am annoyed at the chaotic reading order it creates. But I liked the story.

*Technically this is four overlapping, five book series (20 stories + a joint conclusion) but I only have the first of 3.