I received Audible codes for copies of Roxie Ray‘s A Bride for the Alien King and The Alien Protector’s Mate.

A fated mate is a rare gem … one I never thought I’d find.

With fifteen males born to a single female, women are my people’s most precious resource, one we’re in dire need of replenishing. And Earth is just the place to do it. Arranged matings are the only way we can survive, and as king I must set an example.

But I never thought I’d meet her.

One look at Rosa and I know she’s meant to be my queen. She’s nothing like I imagined, and more than I could ever dare wish for. But humans have only just learned that aliens exist, and I would surrender my kingdom before I forced her into a relationship she doesn’t want.

Time grows short as ancient enemies close in on my home planet, and if we don’t transport our volunteer mates quickly we will run out of time.

This was tolerable. It felt pretty formulaic though. Even worse, it very much felt like the heroine’s thought process went like this:

“This is horrible. This is taking advantage of the poor. This is human trafficking”
“I’m a king. You’d be queen.”
“Oh, sign me up.”

There was legitimately exactly that much interaction between her meeting the alien and changing her tune and flouncing off to an alien world. Much of the rest of the book was like that too. Ray hit the expected plot points but didn’t seem to put any real effort into letting it develop naturally. There was very little consistency in the technological level of the alien species. There was a distinct lack of other (non-servant) woman in the book. Even if they are born only 1-15, they should exist. And apparently, despite ostensibly being warriors and running a kingdom, the aliens have no concept of security. They let themselves be outplayed, tricked, beaten, and invaded far too many times to be believable. (See the statement above about needing to kit the expected plot point.)

All in all, not a winner for me. But the writing itself seems fine and the narrator did a fine job.

On a side note, what the hell is that cover? Beyond just being horrible in general, if you’re going to put characters on a cover, at least make an effort to make them look right. He is described as olive-toned, with scales and no horns. She’s a brunette.

My planet needs women, and I’m here to claim one.

Time is running out for my people, and we don’t have a moment to waste. Earthlings agreed to the bride program, but now they don’t want to follow through. It’s my job to make sure that they do.

I have no time to fall in love. After so long on my own, I wouldn’t even recognize the emotion. But the beautiful and wickedly smart human Vivian awakens something within me, a desire so strong I find myself at war with my duty. I know once she discovers the darkness within me she’ll run. I should push her away before we’re both broken.

And yet, I cannot let her go.

I owe my loyalty to my king, but if I’m forced to choose between my mate and my duty it may destroy us all.

After reading book one, I was wary about this second one. Turns out I liked it more than book one. I liked the characters and the story didn’t get quite as ridiculous. For the most part, the narrator did a fine job and the writing is pretty good. Though the dialogue gets hella formal, uncomfortable, and unnatural once they reach the alien homeworld.

But I find that almost all of my complaints about book one stand true for this one too. I’ll start with the simplest. Why does the publisher keep putting horns on the heroes on the cover? There is no mention of the Svantes having horns. This irritates me so much. It’s like the publishers are going out of their way to get it wrong. Those horns had to be added (though I realize this was probably a pre-made cover).

Next, one of the Svante’s most prominent characteristics is supposed to be that they are great warriors. But they show themselves to be incompetent again and again. It’s just not believable. Part of this might stem from the fact that Ray seems to refuse to populate the books with anyone except the few named characters. They seem to do everything and there doesn’t seem to be anyone in the background. So, the queen has two guards and no more. The same two Svantes that are on the ship with the main character are also the communication specialists on the planet. It’s like the whole castle has a population of maybe 10.

Similarly, there are far too few non-mate (or non-named) female characters, even on earth. Where we should at least see women (passing on the street, as a soldier, as a co-worker, etc) we just never do. I feel this so much. We’re erased from the universe. I think this partly has to do with what I said above about Ray not including extra people to populate the background of the book. All we’re left with are the characters who are given explicit purpose in the book—the named characters and a few ‘guards.’ It’s not that there are no actual women, it’s that there are no women that don’t serve a given and obvious purpose to the plot. It leaves the impression that the whole rest of the world is male except those few exceptions.

Lastly, a lot of this plot hinges on contrived angst and misunderstanding. But one of them can read minds. I don’t care how noble the idea of not intruding on her privacy is. As insecure and in need of reassurance as the hero was there isn’t a chance in hell he wouldn’t peak in her mind. It’s like the author just forgot this aspect of his character entirely for 95% of the book.

All in all, as I said, I liked it better than book one. But I’m unconvinced that I’d want to listen to the next one. 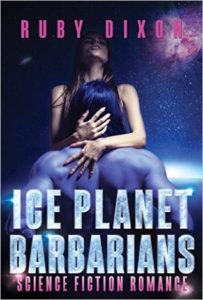 I picked up a copy of Ruby Dixon‘s Ice Planet Barbarians from Amazon when it was free.

Description from Goodreads:
You’d think being abducted by aliens would be the worst thing that could happen to me. And you’d be wrong. Because now, the aliens are having ship trouble, and they’ve left their cargo of human women – including me – on an ice planet.

And the only native inhabitant I’ve met? He’s big, horned, blue, and really, really has a thing for me…

Review:
You might not know this about me, but the Mars Needs Women trope is a guilty pleasure of mine. Kind of in the same vein as staying up late to watch cheesy, B-grade science fiction movies on the Sci-fi channel. Give me a bottle of red and a made for TV movie, at 2am and I’d be a happy camper. Laughing maniacally, but happily. You can’t take that shit seriously and the same goes for most well written Mars Needs Women themed books.

Ice Planet Barbarians is one such book. It is written with tongue firmly in cheek. It’s not that there aren’t serious bits, but the book doesn’t insist on taking itself seriously. Which always seems to feel like it gives me permission to laugh at it, as if I’m laughing with it. It’s freeing.

It’s not without missteps. The conversant computer is a little too conversationally chatty and well informed, not computer-like at all. The alien physique seemed a little too specialized to human female pleasure to be believable. Even without many females, I have a hard time believing every it’ll-feel-good practiced hadn’t been explored in some way. So, teaching him to kiss was eye-roll worthy and I don’t know that the rape in the beginning was necessary to make being kidnapped by aliens for an unknown purpose terrifying enough.

For the most part though, this was a fun space romp. You just have to remember what it’s meant to be (and not be) to enjoy it. It helps if you’re already familiar with the trope. I’d happily pick up more, just for the fun of it.